Ralf pokes the scat with the tip of his trekking pole and says in English it’s fresh, from earlier today. And the wind changes direction, it’s coming from Switzerland now, and I don’t know if that’s good or bad but he’s moving quicker and I do my best to keep up, to breathe so I can get my heart to slow down.

Through some miscommunication in the Alps, Eberhard asked Ralf if he would be willing to take me further than the rest of the party on our first day out, because I acted disappointed we would just hike for an hour to a distant saddle where we’d stop, take a break, and turn back.

And so he sussed me and my gear out, and said his English isn’t so good in the mountains but he’s got three hours before he must return — and off we went, with the storm clouds gathering over the ridge, the divide between Austria and Switzerland.

The Swiss side of the Alps

Ralf said years ago a guy from Customs was there on the ridge and asked for his passport, said he had 24 hours to produce one, but Ralf negotiated his way out of it, says they used to have problems with Austrians smuggling coffee into Switzerland and trading it for wine and chocolates, some 500 years ago. Eberhard says this side of the Alps is cheaper, and that might be the Schwäbische in him that’s always looking for a deal.

I realize I’ve been selfish wanting to see everything, breaking off from my mom, Lily and Eberhard, Eberhard’s ex-girlfriend Regina — who Ralf’s known for 20 years or more, since they all started climbing and sometimes helped their friend Paul lead parties through the Alps.

We regroup back at the saddle after Ralf and I climb higher, a bit off-trail, and he says only 20 or 30 people come this far each year because they don’t know how to read maps (and probably better then, they turn back).

Lily figures out how she can pee on Switzerland and Austria at the same time with one leg in each country, the same as you can in the US over four states, in the southwest.

She’s skipping like a pixie with her Leki poles and having a great time of it, but gets tripped up on a steep grade right at the end of the trail by the restaurant where the cable cars come in and wipes out on the gravel, splits her palm open pretty good, both knees.

I know we need to clean it out but she begs me please don’t, and later Eberhard does it over the sink in the farmhouse with his toothbrush, and she’s watching herself cry while he does it, in the mirror.

We go back to the restaurant with the Moorish beer logo out front, the people Eberhard’s known since he started coming here, childhood friends with Paul — the wife brings a platter of Schnapps and says “on the house” to us in English, and does this both nights after dinner, the second night with a glass for Lily which I have to sniff because it’s the same color as ours, but it’s only a Fanta.

Willi and Elsbeth invite us into their flat on the walk home and produce more Schnapps, make some joke that two is better, then dab some on Lily’s palm and say that’s the way they all did it growing up, if you fell or cut yourself, you got Schnapps put on it — and Eberhard asks if I want to have a beer outside before going up to the room, so he can have a smoke and we can talk more about Paul, whose parents realized they could make a business for themselves when the village started seeing tourists for the first time in the 1950s — and they’d make Paul sleep out in the hay with the animals while they rented out his room. Hemingway started coming, and made a name for the town Schruns — and Eberhard points up the valley to where his friend’s mom got killed in an avalanche; the house remained standing but they all got sealed inside and died. 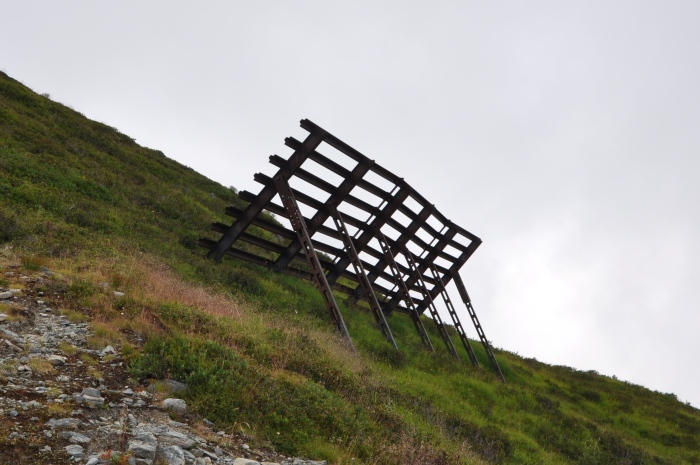 These structures built to impede avalanches, with varying success

And Paul went on to open a ski school and lead climbs, and Eberhard and his then girlfriend Regina would help, and it was a good living — the tourists buying you drinks afterwards, until a larger guide service moved into town and took over.

We’re late getting up in the morning because Eberhard had the alarm on his phone set for the wrong day and he’s visibly rattled, and the guesthouse woman, Frau Schindler, has to put knitted chicks over our soft-boiled egg cups to keep them warm, and mom suggests maybe she and Lily can just take it easy and ‘chillax’ in the town, as Lily says — but Eberhard is having none of it and getting increasingly stressed, his breathing labored, wolfing down the bread rolls, the cold cuts, the coffee in the dainty cups, the Viennese lace in the hutch.

Chalk engraving from 3 Kings holiday in January, to bless the house

Riding the cable car up with Regina, Eberhard’s ex, she and my mom talk about him in German, mostly good, but with some eye-rolling about how he can get with regards to time, with punctuality, which I fully understand but still can’t condone.

We were all supposed to ride in the same car — Lily, my mom, Eberhard and Regina, Willi and Elsbeth, but the latter got stuck in the turnstiles coming in and we hopped on the car with much shouting in mixed English and Deutsch, and it all didn’t go exactly to plan as a result.

We’re the only ones in the farmhouse, with mountain views looking across the valley at the fog curling in, a tabby cat who looks bored and disappears through a hole in the barn — and still with the mountain air, the smell of the woodsmoke, Lily and I have bad dreams both nights: Lily, about the ‘holo-cast’ as she calls it over breakfast, me about getting in a car crash, either a flashback from the autobahn or some foreboding — and on our last day here Eberhard insists we drive to the top of the mountain, where each turn is numbered with a stone to identify the switchback (or a marker for where someone died), one through 30, I count each one, buy a couple mini bottles of Schnapps in the gift shop and drink one in the backseat, coming down.

Back home in Besigheim, we revisit the idea of staying in Germany through Christmas, and Eberhard thinks he can talk to the Bürgermeister to pull some strings.