Home › travel › Stepping out of the lines

Stepping out of the lines

Summer ends so fast here it’s like they’re taking down a theatre set and replacing it with autumn, overnight.

Eberhard has a saying, «I’m a man, I fix things» — and he lets the words hang over me like mist, like he’s allowing for something in his eyes to resonate that could be male competition or encrypted advice, I can’t tell.

I don’t compete with other men in the area of fixing things. Is he implying I’m not a man, if I can’t fix it? He fixed the coffeemaker, the lock on the front door, the hose reel, the dishwasher, and even got a ball out of a tree that was stuck there earlier.

We’re all trying to adjust, living here together. Charlotte’s been hard, complaining about wanting to go home since July — Lily is just Lily, looking more like a teen every day, the tips of her hair that were dyed purple have been blonde all summer.

And I get asked why I seem so angry which is a good question, and I try to answer it by writing and taking long walks up the Himmelsleiter, the steep Roman steps in the vineyards that translates to the same ladder that appeared to Jacob in a dream, featured in the Egyptian Book of the Dead, the title loosely means “stepping out into the sunlight.” 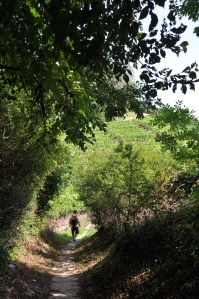 I’ve made the mistake before of thinking you can solve major life problems just by changing your location. Like, move somewhere else and it will magically fix itself — but it never works, the problems only get worse, unless you’re David Bowie leaving LA for Berlin to get clean, which worked for him, but there aren’t many David Bowies, and he had to recreate himself on every record like it was a new play each time, a different character, a new set.

It was hot as hell here the last three days of August, mid-30s Celsius, so Dawn and I drove to nearby Bad Wimpfen (lots of German towns start with ‘Bad’ here, which means to bathe, they’re natural vapour baths from Roman times) for a festival where they celebrate ancient guilds and you can see people in traditional Medieval garb, multiple layers despite the heat, with tattoos, earrings, long beards, daggers on their waists — it feels like how I’d imagine a Deep Purple concert here in the mid-70s, or the band Hawkwind — people have a hardened, timeless look to them, which you could also attribute to the heat and the wool leggings.

Dawn and I camped out under an umbrella in the beer garden, glad we didn’t bring the kids — I tried to get a photo of two guys in Medieval garb texting with one hand and holding a spear in the other — and later, we had Thai food at a table with a couple Americans working in Stuttgart,  and the food tasted more like Chinese and wasn’t altogether good, and why would it be, here in some Medieval town in southern Germany? Flags with falcons and large red talons, dated “1565.” Ich möchte the Tom Kha Gai, bitte.

Charlotte is one of those people who has to be doing something with her hands or feet, she’s humming all the time. Like those I’ve known with bouncy leg syndrome (including myself), they can’t think without moving — or a Canadian VP I knew with an Italian name who’d rock in his chair like a metronome and you were OK as long as he kept rocking but once he stopped, something was wrong.

And what seems like such a bad idea here on the surface (going to the UK over the winter months and laying out cash for so many nights of accommodations) may be such a bad idea it’s actually closer to good than bad, the way some people think Mick Jagger is so ugly, he’s sexy. Go far away enough from the obvious, and you might be on to something.

We booked our rentals for Christmas in Cork, preceded by a long stay in Dingle along the west coast of Ireland, and added up what we’ve spent already in reservations — and now it’s time we filled in the rest of our nights with hostels and get used to cooking pasta, and living on the cheap.

I overheard Dawn talking to the girls about what it means to be rich, like you can still be rich in a sense without having a lot of money — a feeling we should anticipate when this is over, more memories than money, but it seems you can always find a way to make the money and it’s not quite the same in the end, when you compare the value of the two.

In a museum today Dawn reached out and grabbed hold of my beard, asked nicely, when are you going to cut this? It makes your face look different, it looks long.

We’re the same cast playing all the parts ourselves — all the writing and direction, the lights and sound…and it goes up and comes down a lot quicker than you’d think, like the change of the seasons, one day they’re onto the next show.