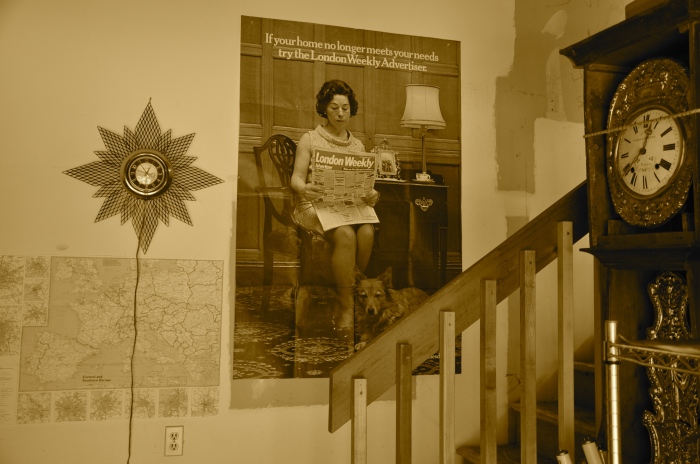 It sounds like a joke, two Turks and a Kurd in our German class replaced by two Croatian construction workers and an Afghan refugee, but it’s no joke really when we go around the class and say where we’re from, and have to wonder what they think when we say we’re aus den USA.

I lie in bed at night thinking, wishing I couldn’t, but like other things we sometimes wish for, it gets farther away the more you wish for it. I count backwards in English, in Deutsch, thinking about nothing, The Tell-Tale Heart, the sound of the clock in our room, a heart wrapped in cloth.

If a clock stops telling time does it cease to be a clock?

In the kitchen earlier I realised I was killing time cleaning up, prepping, doing everything imaginable for the meal, when all I was doing was brining chicken breasts, pan-roasting potatoes, preparing a salad.

How unfulfilled, middle-aged men who fancy themselves brilliant become irascible the more time they spend alone, the more others try to break down the crust that forms around them.

Charlotte writes her first story, and her spelling is still first grade level even though we’ve started second grade, has that Winnie the Pooh quality where the letters are backwards or flipped, but is so proud of her story, how she started writing up the sides of the page when she ran out of room, I offer to type it for her so we can email it to our family back home. What they must think of us, Afghan refugees, I don’t know.

They don’t worry about the kids here as much, or arguably enough. We see them running around unattended to school and back, taking the train by themselves. At the zoo, Bernd’s daughter-in-law just writes her cell number on the inside of her kids’ wrists in case they get split up, and does the same for our kids, who don’t want to be left out. And the numbers are European, where the ones look like sevens, and I think darkly it looks like prison camp tattoos, the ink on the inside of their wrists. But Bernd, a former project manager, has announced our plan in case we get separated because he’s thought it through, repeats it to ensure comprehension, has a logic that’s threaded through all thoughts and moments, even the plan later to get drunk for his birthday seems well cared for.

I lie in bed thinking about John, who slept in this same bed, how he and my mom wound up here in this small, German village: mom says they just went from town to town without any real plans, sampling wine and eating. John would say they just came from such-and-such a place, where they claim to have the best wine in the region: and this would prompt the townspeople to get out their wine and say well, try this…and so on, to the next town.

Alone in the kitchen with the refrigerator photos askew, some of them upside down falling out of their seats — and behind me in German class out the window the teacher points to a red squirrel digging by a grave marker of someone born and died in the 1800s, a name that means nothing to me, but it’s all I have to think about in the dead of the night with a clock that won’t tell time, that sounds like my heart as the bed springs shift with each beat, through something thick used to hide or protect it.