Home › music › Hit by a Cadillac

Hit by a Cadillac 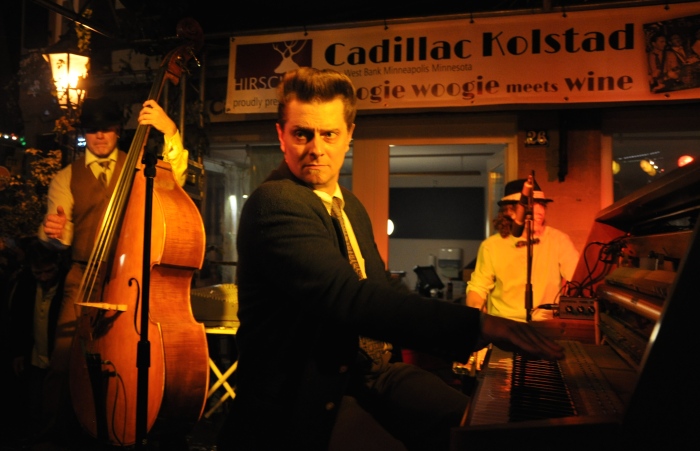 The fourth night with the Boogie Woogie band at the wine festival here in Germany and it doesn’t sound as loud as it did the first three nights, our ears have gotten used to it. And as we resurface now on the fifth day, the barricades outside my mom’s taken down by the Stadt, venturing out to the grocery store to exchange empties and get more eggs, sound comes through a twisted tape reel that’s been left out on the dashboard too long, mom and I both sensitive to the small, crinkly sounds of people handling the pre-packaged produce, the weight of it being dropped in the carts, the clunk.

Though we have a shopping list, mom combs each aisle like it’s her first time there, and part of that’s because they put everything up willy-nilly, and the other part’s because there’s not much to do during the day so we take our time, and things present themselves to us — who guessed, a five-piece Boogie Woogie band from Minnesota would blow this little German town away.

The singer takes to the piano like it’s punk, in that irreverent Jerry Lee Lewis way of pounding it, his hair coming out of the pompadour as the night wears on, its own instrument, and Benny notes how he drinks on stage it’s not an act, but seems part of something more real and authentic.

They play for four hours, four nights in a row, with two more gigs planned later this week, and sell T-shirts with the singer’s face drawn up like a Voodoo doll with the eyes X-ed out and the hair hanging down, a couple shrunken heads or fuzzy dice hanging from a rear view mirror.

Then, the late night food truck scene with a half meter of grilled meat presented on a stick, a piece of baguette speared right through: action shots of teenaged boys and girls on the sign smiling, posing with their mouths open taking it from either end, only 5€!

The stage is so small, you can get right up to it and put your wine glass on the edge and reach out to touch the band. A couple white-haired German ladies muscle by me and form a pit in front during “Play With Your Poodle,” as the singer pronounces it more like pooter, makes a show of it as he cries, “I wanna play with your poodle,” and the Germans go on dancing and nodding, downright boogying.

Afterwards, we go home to collect ourselves and I put on the closest I have to the band, Joe Jackson’s Jumpin’ Jive — actually swing, but similar to the music up the street — and Benny tells me about the Swing Kids, a film from the early 90s, how swing was demonised by the Nazis for being Negermusik, performed by a number of blacks and Jewish musicians, and yet they’d crowd the swing clubs because they identified with British and American lifestyles, created a counter-culture with their hair and dress, their jargon, and mocked the Nazis by crying Swing-Heil for Sieg-Heil!

And I’d read that as they came into power Hitler began art directing, mandating what was acceptable and allowed, and art could not be ambiguous but needed to be “straightforward” instead. Benny writes in my notepad the phrase entartete Kunst, taking the art out of art, which the Nazis also said about swing music, “degenerate art.”

And the singer, Cadillac Kolstad, jokes between songs You can’t rush art, as he toasts the crowd with a whiskey, and Benny’s dad is there in the crowd and smiles at me and says, “What do you think of your fellow countrymen?,” and I say, That’s a loaded question.

I eat a salad for lunch that looks like a pig that swallowed a grenade, pink shredded wurst, raw onions, pickled carrots, a hard-boiled egg, and the kids insist I ride the rides with them at the fair down the road, and none of them seem to have proper belts, you just get inside and hold on, and as we climb and spin we see Eberhard looking for us down below, and what kind of cop can’t find four Americans at the amusement park in a small-town fair?

The guys operating the spinning-thing are all smoking, standing around looking cool, yelling German into the microphone from the booth with words that mean faster and ‘not loud enough,’ and they have tattoos and wife beaters or muscle shirts with distressed patterns, and lean over the kids in their seats with their cigarettes still going as it spins around and plays Vanilla Ice, ‘ice, ice baby.’

On the last night, a girl with the band asks if I can take pictures with my good camera and says I can get up on the stage with them behind the drum kit because they want to capture the view of the people up the street with the lights hanging from above, and Dawn has more wine than she has since 2003 we calculate, and at the end of it she needs to take a walk for some fresh air, and starts crying because the singer reminds her of an actor friend she knew who died, who was 100% instinct, just channeling, in his real element — and I think the crying’s good because she realised a part of herself died when she stopped acting, and the band does so much for us this way, which is why the art is frightening to tyrants and control freaks, it reminds us of who we really are and could be too if only we had the guts, the nerve. 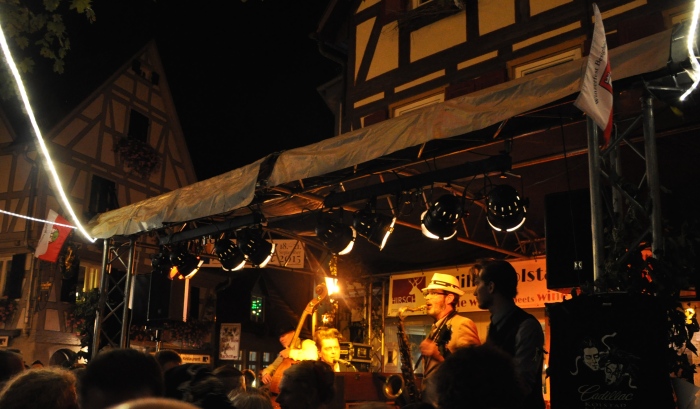