Home › travel › Who needs Munich when you’ve got the Wasen?

Who needs Munich when you’ve got the Wasen? 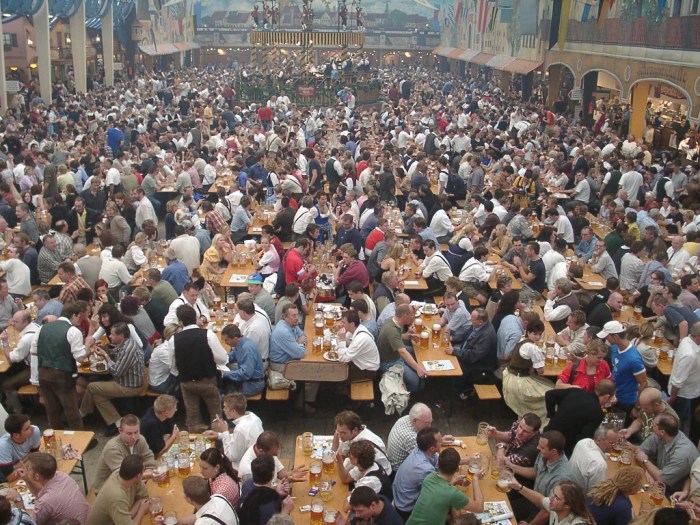 For reasons perhaps too private to get into it’s hard peeing in lederhosen, hard undoing the suspenders through the clasps when you’ve been drinking, hard clearing the edge of the leather because they don’t come with flies or barn doors, you just climb in and out — hard looking cool standing over a trough in a temporary WC inside a beer tent with other men singing, spitting, doing things men do in public restrooms better not discussed on blogs.

But as with anything, after a while you get used to it — and I realise you don’t have to undo the clasps, you just slip them off your shoulders and back on again, and as the night wears on the WC starts getting crowded and strange — a guy gumming the wall like a mollusc, singing “Sympathy for the Devil” but stuck on the first line, can’t get past it, like the record’s skipping, so I feed him the words (‘a man of wealth and taste’) and discover there’s a separate queue for private stalls, and start using that one instead.

Lily says she was surprised at German school, the kids all just change together in the same room before Gym, whereas in the States they have private stalls — and both of them are delighted they get to use hot glue guns unsupervised during Art, a “large saw” Charlotte describes, for cutting.

At the butcher, the woman behind the counter uses what looks like a battle ax to muscle the pork cutlets apart, grabs it from a hook and slaps it on the cutting board but can’t get a clean cut with the ax so she lifts the whole unit up, the blade stuck in the bone or the muscle or whatever, and slams it down two or three times, a messy break.

And in the beer tents, the Cannstatter Volksfest, the second largest beer festival in the world after Munich and for me much better, because you can actually get in and drink beer and have fun and not have to worry about reservations, long lines, or droves of drunk tourists — they are climbing up on the tables clapping, and the wood on the benches sags as they bounce up and down, some of them in heels, taking selfies, the one litre ‘Maß’ equals almost three cans of beer from the States and no, you can’t just have one — and they’re selling balloons with Hello Kitty or Sponge Bob, Papa Smurf, My Little Pony…cheap, felt Tyrolean hats with fake feathers, everyone smoking — and the security guys look the same as they do everywhere with the sides of their heads cleanly shaved, ribbed necks, mic’d with ear pieces and radio sets, stern in their greying goatees…the band does a call and response to “Summer of ’69,” “The Boys of Summer,” and every song sounds like “Edge of Seventeen,” (just like the white winged dove / sings a song, sounds like she’s singin’) and finally, they’re all singing “Country Roads” (take me home / to the place I belong) and I find it funny and ironic they’re singing about West Virginia, and how alike we all are, or at least maybe it’s just the Americans and the Germans, we’re the ones most alike.

Awaiting new Followers and Likes after a blog is published

I want to tip our server because I think a.) it’s nice to tip, and b.) it gets you better service when you want another drink, but Eberhard won’t tolerate it, insists I just give her .70 and that’s normal — then pockets an unopened ketchup packet that came with our pommes frites before we go — and after a couple hours, with all the smoke and the Oy!, Oy!, Oy! call and response — the Dirndl dresses and the boobs, I need some fresh air, need to remember who I am and what the night sky looks like and not let all this ruin my appreciation of beer and music and women in bar maid costumes with tight braids and aprons.

Mom can’t get a grip on her Maß because the glass is so big she needs to use both hands, so it looks like she’s drinking soup — and every time I take a drink it feels like I’m chugging, which feels strange at 44, and worse in the middle of the night when I wake up bubbly and farting from raw onions and some Döner thing I had in the Bahnhof, shaved lamb in a pita with a white sauce I leave half-eaten on the bench for the pigeons.

Returning much later than any of us thought we bump into the singer from the Boogie Woogie band, Cadillac Kolstad, and I tell him he should come down Türkengasse by the Obama house, where mom lives, and I’ll do some American cooking for him before he goes back home to Minneapolis next week. The owner of the Hirsch points out the panel comes down in the front of the lederhosen, that’s what you do when you need to pee. 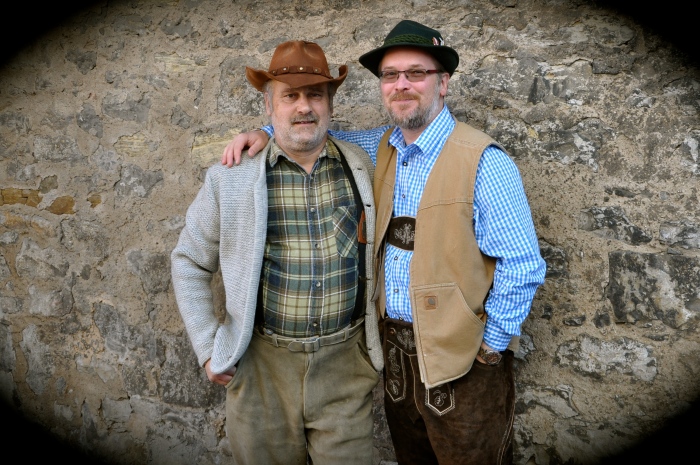 Eberhard’s lederhosen from his dad, elk leather (hat by Stetson)