Strange dreams on a boat crossing the North Sea 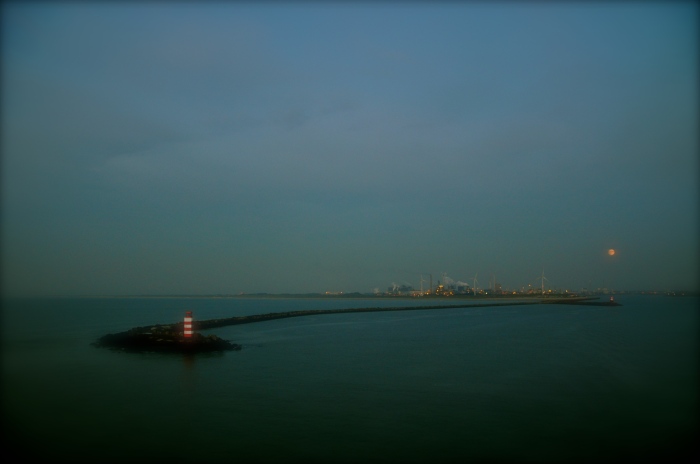 In the cocktail lounge at dusk as the boat’s engines are starting, there’s an empty stage planned for live entertainment later, and Walking on the Moon playing, and it seems every song is made just for us and our journey now, like stepping on a moving walkway at the airport once you’re on, you can’t get off.  It’s the same as the phrase “burning the boats,” the idea you can’t go back once you commit, like burning your bridges, or crossing the Rubicon.

The boat ride from IJmuiden, Holland to Newcastle-upon-Tyne, England is part-ferry, part-cruise, and thankfully more of the latter, with well polished staff and complimentary drinks in the mini-fridge in our cabin, a private shower, barf bags, pull-out bunk beds for the kids, and a radio intercom system that comes on with a delicate chime ever so often, a cheery English woman’s voice I could die alongside, you can hear the languages blur and overlap as she goes from English to Dutch to German, and it feels like we’re nowhere crossing the North Sea as night falls: I stand on the deck watching a full moon rise over Amsterdam and go half-lidded through the clouds, the same colour as the pink-peach lights that shimmer on the shore through some trick of the light or atmosphere that makes them sparkle that way.

We get ribeye steaks with starters, an Argentinian Malbec, fried scampi, chips, Armagnac ice cream with raisins, and in the morning when we get off it’s the first time I’ve been on a plane or a boat and left feeling sad, like I wish there’d been more time: we’re rested, showered, well-fed, and except for the fact that no one said anything about Landing Cards, it’s a smooth passage from the Schengen into the UK, where the Customs official asks what I do for work, and tilts his head a bit at the back of our car and German plates, the trunk stuffed with cookware and a kid sized acoustic guitar, a crate of books on how to learn German, a Take Your Kids to England! guide, a North Face bag full of compression sacks, sweaters, hats, wool mittens.

But like that, we’re on the opposite side of the road entering the roundabouts, following the A9 to Morpeth, crossing into Scotland in about an hour, the A1 toward Berwick-upon-Tweed and further north along Edinburgh, crossing the Firth of Forth toward Dundee, an old cottage studio apartment on a farm outside of Arbroath, a coastal fishing town, but further still to where our rental is located, on an estate I can’t pronounce without sounding congested (Kinblethmont), accessed by way of Colliston, just turn right at the church and follow the signs.

On the boat at night there’s the purr of the AC overhead and the constant roar of the engines, and on the deck it’s surprisingly mild outside with all the smokers leaning on the rails, watching the boat make patterns of the waves reflected in the moonlight below — and in our cabin it sways ever so slightly in a way you could really go mad or sick over if you thought about it too long, and sometimes when I walk, the floor seems to disappear for a half-beat, reminding me of earthquake dreams I’ve had where the ground just falls out into space — and how much of an illusion it really is, stable ground beneath your feet.

Leaving Amsterdam Monday morning I meet an English family staying in the flat next to us with two girls the same age as ours, and the wife looks openly mortified when I say we’re going to Scotland for a month in November, says “but they’re won’t be anything to do there,” and it will be so dark — and when we arrive at the cottage and the owners greet us, they apologise for the weather but we say we’re from Seattle, and yet there’s no real acknowledgment of it from them or the English couple in Amsterdam when we say the same, that we can handle the dark and rain — it’s like everyone thinks their weather is worse than everyone else’s — yet as we pass Dundee around 3 o’clock it really does seem to be getting dark, and then later when Dawn gets on a conference call and has to Google What time is it now in Seattle and What time is it now in Edinburgh, we realise the time is different here than in Amsterdam, and when we thought it was getting dark at 3, it was really 2.