Home › travel › Rattle my bones all over the stones

Rattle my bones all over the stones 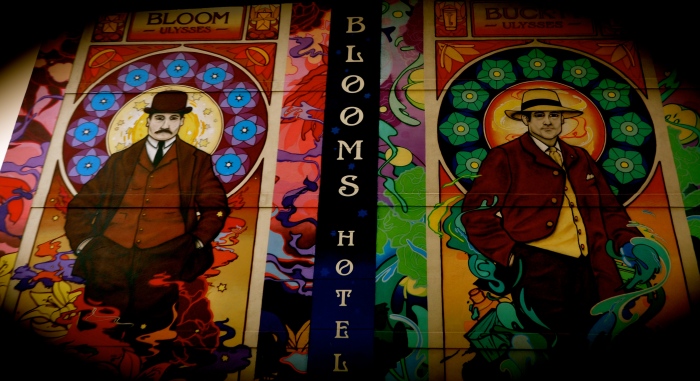 Saturday, all of us on damp streets swaddled against the wind coming off Dublin Bay, wandering northeast from our flat past large churches, intersections where the asphalt’s painted LOOK RIGHT, LOOK LEFT, and the people have complexions that remind me of our friend Rob West, the reason Dawn and I got together 16 years ago.

Maybe it was James Joyce or a train to Portland, or my ex-girlfriend taking a job at IKEA, but if you take the time to trace back events leading up to meeting someone, it forces the question of fate or coincidence, and if you can even separate the two.

Rob was doing sound design with Dawn’s theatre company GREX and called to ask if I’d join the Live Foley Orchestra, a couple guys backstage shaking pieces of scrap metal to simulate the sound of thunder to Shakespeare.

I was so down on my luck and out of it, having just climbed Mount Rainier and now with winter coming on and nothing to do, living alone in a bachelor pad in Wallingford, I agreed — and met Dawn, the director, and a couple months later Rob suggested the two of us “date” and it was all the talk of the cast, and soon Dawn had to ask her ex-boyfriend Reggie, who was playing Laertes, to pack his bags and move out, as he’d been living off her couch since they split up in that way actors sometimes do — and come January or February Dawn was moving in with me, we got through Y2K, and watched them blow up the Kingdome.

Rob was in a seat behind us on the train to Portland and overheard me and my friend Don talking and inserted himself, we exchanged numbers, and years later Don and Rob worked in a variety of tech start-ups, and Rob and I started some kind of book club for nerds that was really just me and Rob and never got off the ground, but it was nice to meet someone who could go all glowy-eyed talking about Joyce, who inspired me to read David Foster Wallace, and I could pretend I was an intellectual in his company, which was like trying on a hat or a mask and looking in the mirror and posing.

Dawn and I ended our first date at Joey’s apartment, who was turning 35, studying stage combat and sword fighting, brother to Victor who played drums with the Violent Femmes, but wasn’t very interested in making a big deal out of it, he just smirked, changed subjects.

We pass plaques honouring the great Irish writers and I imagine them walking the same streets, or climbing the stairs in these old pubs, their cheery music and dark tones, warm light: The Brazen Head, the oldest pub in Dublin, a series of small, interconnected rooms like chambers of a heart — and if the heart could hold memories it would overflow here, and probably best it can’t, its strength comes from its ability to trust and feel, and memory can sometimes get in the way of that.

When I’m done climbing Mount Rainier it seems there’s nothing left in my life that year, my job is silly, I’m a secretary approaching 30, still single, back from five aimless months in France, carrying around two cats, one with a chronic bladder infection that pees blood on my bed, not good for dating.

I have my bungalow in Wallingford decked out with a rust-coloured shag rug in front of a fireplace with a remote that’s a blocky plastic thing and looks like something from the 70s you’d use to open a garage door, and when you hit the button it makes a wild “woosh” and the fire comes on, and lights the shag rug, and I often don’t sit there because the room feels too big alone.

There’s a riot downtown for the WTO and Seattle’s mayor has the police force out in riot gear, using tear gas, and I have to leave work early just to be a part of it, to walk into the fray because it feels like history, and I don’t want to miss out. I spot one of the singers from a band there, named after a number you call on the freeway if you see someone in the HOV lanes who’s driving solo, 764-HERO.

And here in Dublin on our first night in a new flat, the kids in a small room next to ours and the curtains drawn, I wake in the morning in the dark and lie there for a while trying to think what day it is and where we are, and can’t remember: it’s a crowded intersection with all of us looking both ways, waiting to cross.

Post title inspired by a nursery rhyme that can also be found in James Joyce’s Ulysses, in a song by The Smiths, in a Neil Gaiman story, with more about it here.