Home › travel › Through the gap in Shakespeare’s garden

Through the gap in Shakespeare’s garden 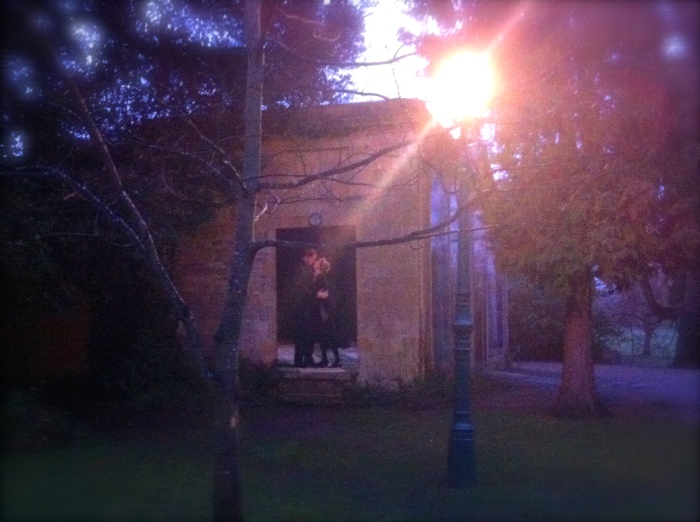 Outside the Swan Theatre, Stratford

Christmas in West Cork: Cork, a town on the southern coast of Ireland, “West Cork” the territory to the left of it loosely defined by small towns with names like Skibbereen, which we visit just so we can say we did: Christmas Eve during the day leaning against a store front taking pictures, to remember what we can for another time looking back, a woman stops and says I like your karma and I smile and say thanks, then realize she means my camera — and though it’s a crowded sidewalk and we don’t know each other and my family comes out of the shop and pools around her, she keeps talking: how Christmas is such a lovely time but it’s a pity everyone’s in a rush, how this year she made photo albums for her two sisters (no presents), took the time to organize all the pictures from when they were kids — and they just sat around going through them crying, and I think she may be a bit slippy, half of her face sags like she could’ve had a stroke once, but there’s tears in her eyes and when she turns I watch her walking up the street and think about her later in the week when I’m out walking, and want to save her memory for a long time too.

New Year’s morning, walking up the uneven lane to the end at our friend Alex’s in Chester, past the houses with names out front and no numbers, across from trees leaning on their sides that look they were drawn, crows and winter birds pecking at the roots, everything damp and dripping.

The owner of the flat says you can walk across the town in 10 minutes, Stratford-upon-Avon: just turn right at the end of the street, take the gap through Shakespeare’s garden, and that puts you right into town.

Shakespeare, who’s so cool and mythic he even looks real on advertisements on the side of buses, like his essence can’t be lessened by marketing even, in his eyes you can tell he’s smiling inwards — but less so at the monument where his statue sits on the top around the figures he created below, Falstaff, Lady Macbeth, good Prince Hal…whereas he used to be by the theatre facing the church where he’s buried they had to move it when the theatre burned down and they rebuilt it, and now he looks across the street at a Holiday Inn.

Killing time in Waterford on our way to the ferry out of Rosslare into Wales, confined to a single room for two days with storm Frank coming on, holing up in the hotel bar watching a world championship of darts, watching it longer than I’d like to admit, how the guys have nick names like The Bull or The Spider, and just like NFL football in the States, they do that thing where they stand in front of the camera on either side of each other with their arms crossed looking tough while their stats display at the bottom — and there are pretty girls interviewing them and drunks in the audience, and their family is probably watching them broadcast live and proud, thinking at last they finally made something of themselves.

We get out on the last ferry before Frank comes but the water is so choppy, kids and grown-ups are puking here and there, some less discreetly than others, and the ferry clean-up crew tends to it matter-of-factly with rubber gloves and plastic mops, no one’s even apologizing about it, and when we arrive in Wales they have another language too that’s more consonants than vowels, and looks like a Scrabble hand that would be money if you could just do something with it.

I go from a Yeats collection right into Stranger in a Strange Land and it’s not a good transition; it’s changing the radio dial from Classical to 70s, and not good 70s, but it gives me hope if someone can write a story about a Martian on Earth that holds my interest, perhaps I can do the same with mine.

And over the river Avon the water is glass with an arctic air coming into England now, a proper bit of winter, along the muddy river banks to the public footpath into the country, through frosty patches of mud, some cows and birds, a pink-streaked sky: and there they laid Shakespeare, and on the day they did they probably went out and had a pint, and the moon had similar phases and the river looked about the same too, and their hearts were not much different than ours, which is both comforting and ominous, no different than life itself.