Dawn got back from two weeks in Italy with her mom, I returned from Amsterdam, our French friends came down with two of their kids, more French friends came and left theirs at home — and with Eberhard, Benny, and others coming and going we had every room in the house full and decided impromptu parties are best: Laurent in the store asking me seriously, are you sure we have enough wine?, buying three more, handfuls of Crème Fraîche, his wife Nanou a pack of Marlboros, her son Mathis catching us later on the front step accusing her Tu fume! and me covering up, lying for her.

Eberhard slaps his gut, points at mine, smiles and gives me a thumbs up like I’ve finally arrived now that I look like him, and it’s the beer that puffs you up like a pretzel and makes belts unnecessary, shirt-tucking too.

We keep the cheese in the laundry room because it’s the coolest room in the house with the stone floors and the cat flap, a kind of annex to the refrigerator with the overflow of butter and eggs stacked on the washing machines, bags of potatoes and salad heads on the fold-out drying rack; it smells old and prehistoric from the stone floors and the fact you have to manually empty the laundry water from a little teat onto the ground; it takes on an earthy scent of sphagnum moss and wet peat, and today I realized the butter’s been melting on top of the dryer.

And now that it’s time to leave after eight months in Europe it seems we’re finally fitting in, and I get the thing with Europeans and scarves: after you get used to that warmth around your neck you start to depend on it like lip balm or coffee — the body is one-sided, predictable, and the mind doesn’t help matters much.

Laurent, who works in Luxembourg, tells us after Brussels all his friends kept texting to make sure he was OK and he had to tell them it’s far away from him, really far — but to us Americans it doesn’t seem so. Distance is more than geographical, it’s psychological and cultural, too. You can put things out of your mind and make them seem far away or not act on something that’s right within arm’s reach based on what you believe or what others want you to.

Mom tells the story of when they lived in the south of France by Laurent’s parents’ house, the day she found the hanged man on her walk with the dog. She saw him there at the top of a hill overlooking the sea and thought it must be a joke but when she got up close she realized it wasn’t and tried to tell the vineyard workers to come down and do something but she couldn’t speak French and had to rely on pantomime and face gestures and pointing, and no one understood her, they all just shook their heads and waved her off, and after that her walk on the hill was never the same.

And their Swedish friend Jan the writer lived there too, who wrote conspiracy theory papers about the government and was convinced the Swedish Stasi was after him, breaking into his house and rifling through his desk looking for manuscripts (he showed me what they did, how they broke the door and knocked over his filing cabinet before I house-sat for him alone for a week) and how, when he drove down to visit mom in Germany it was August, hot, and he brought a fresh fish that was so big they had to fold it to fit it in the fridge.

And in the morning after a long night of candles and wine and French speaking in our house mom asks did Jan really call last night, or did I imagine it?

Laurent shows us photos on his phone he and Nanou took of one another in bed the night before, goofy, artistic shots they don’t remember taking; they couldn’t stop laughing after Nanou tried to kiss the kids goodnight but fell when she stepped on the blow-up mattress and one of them shot up in the air.

On Easter Monday we sit outside a café owned by the Hungarians across from the Italian market, people slowing down in their cars waving at my mom but she doesn’t recognize any of them, and the French girl Valentine talks to Lily through Lily’s laptop using Google Translate and they pass it back and forth typing phrases but it devolves into snarky comments about Lily’s sister Charlotte eating poop — and the little boy Mathis pouts in the corner with his action figures because he’s just learned the Easter Bunny isn’t real and none of us know how or why, or what to say.

And in the morning we remark isn’t it sad, the idea that one of our first rites of passage is to learn what we thought was so safe and sweet is just a lie told by our parents, whom we trust the most, corroborated by the media.

It’s mixed, our feelings getting ready to leave here and more for me, what the trip symbolized in my mind, this thought I could reinvent myself and figure things out by going away. Like Dawn says, the banal and profound are combined and it’s hard to parse one from the other, and you don’t have to go away or travel anywhere to experience that.

Maybe it is like believing in the Easter Bunny or Santa Claus, this thought that travel can fix us or reveal some deeper, hidden truth. It’s true just for a time, and maybe that’s long enough.

Blog post title from the song of the same name by the band Felt, 1985, produced by Robin Guthrie of Cocteau Twins. 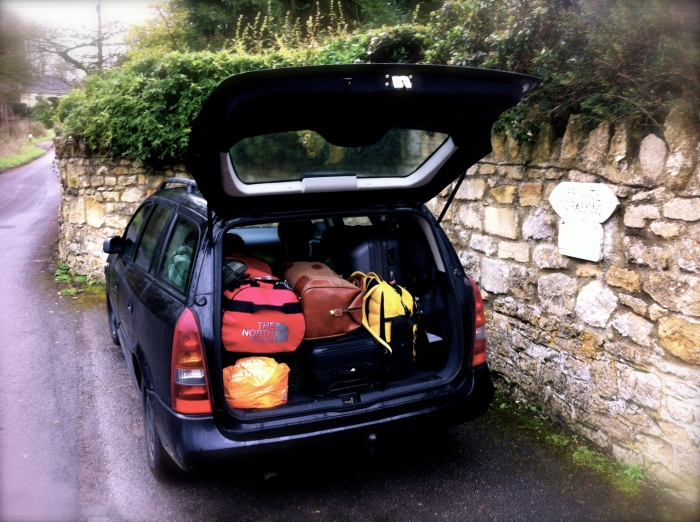 The Opel Astra kombi we bought for our 90 days in the UK in the lay-by, Combe Down.