Home › humor › The world’s a lot bigger the first time

The world’s a lot bigger the first time

When we got back home to Germany they were building the beer halls outside Stuttgart for the spring beer festival and Eberhard said we would go tomorrow and leave at 2:30 with plans to return by 8 — and I recalled my first time with him there in 2009, how after a couple liters I said we should get something to eat but he just slapped his gut, raised his glass and gestured to it, said This is my dinner, right here — and we resigned ourselves to greasy lamb shavings cut from a spit with a long knife served in pita pockets with raw onion we wolfed down on the subway, and Eberhard’s face went boyish when he handed me a bottle of something brown and strong and Italian that seemed to have too many Z’s in it, and the next day was tough.

But this time, we talked about eating beforehand, to agree on a strategy, and when we sat on a bench in the tent the girl said something to me in German which made Eberhard laugh: they gave us two tickets and said the next one’s free but we have to drink it by 5, and we toasted and took a selfie, snapped pictures of the models in the menu, and I thought isn’t this great.

When Dawn and I leave Vienna it feels like the train’s going backwards; we experience the same stations we saw when we arrived in reverse, changing in Salzburg, then Stuttgart, catching the Regio back to Besigheim. And I tell her the story of the truffles I tried in Amsterdam, how I researched it online because I’d heard they stopped selling mushrooms since some French girl lost her mind and jumped off a bridge — but after reading the threads and the inane chats, it seemed the only difference between the two is that one grows above ground and the other below — and with truffles, you have to consume a lot more.

I asked the girl at the smartshop if it was true, that you needed to eat a whole 10 to 15 gram bag, and she said it was her first day and she had to ask someone else — a woman probably in her third trimester, who answered in Dutch — and the girl translated for me in English, she said It’s different for everyone, it just depends.

The laminated menu had about a dozen varieties from Thailand, Hawaii and Mexico ranging from weak to strong top to bottom, so I picked one in the middle called Dolphin Dreams, a vacuum sealed bag with a dozen pebble-shaped pieces that looked like miniature brains or cat turds.

And I’m lucky because I only ate one or two the next morning heading north from my hotel to the museum district  — it was early enough the street cleaners were out, everything getting put back where it belonged — and by the time I got to the Van Gogh museum I was starting to come undone and had to find a bench to compose myself, and it was there I saw a playground that reminded me of the same place I was with my kids in October, a kind of emotional dechez-vous, and for a moment I felt the same as it felt the last time, with three months in the UK and endless possibilities ahead — and now that it was all over and I was alone, it started to bring me down.

I threw the rest of the bag out and pushed it deep in the trash so no one else could get it, took note of the time, reminded myself how long it should take before I got OK, and turned back toward the train station, stopped in a café to get something in my stomach, sat in a sun room on a square moving my arm in a mechanical, arc-like motion with my coffee like some figure on a clock, paid my bill and felt all the eyes on me as I left and tried to act normal, knowing I’m not, and decided I’d buy a 24-hour pass canal cruise.

And I sat in the square trying to enjoy myself, to be in The Now, and realized it was the same square where I’d been with my family in October, how it seemed so much bigger the first time but it didn’t look the same now, like it’d shrunk — which wasn’t the drugs as much as a play on time and space I thought, how things seem bigger the first time, it’s like going back to your childhood home, how it looks smaller when you see it in the past. Maybe it’s the ratio of you to the world that explains the difference when you’re smaller, or the fact your mind is more open to the possibilities of the world, it doesn’t have the same limitations, you don’t expect anything from it yet. 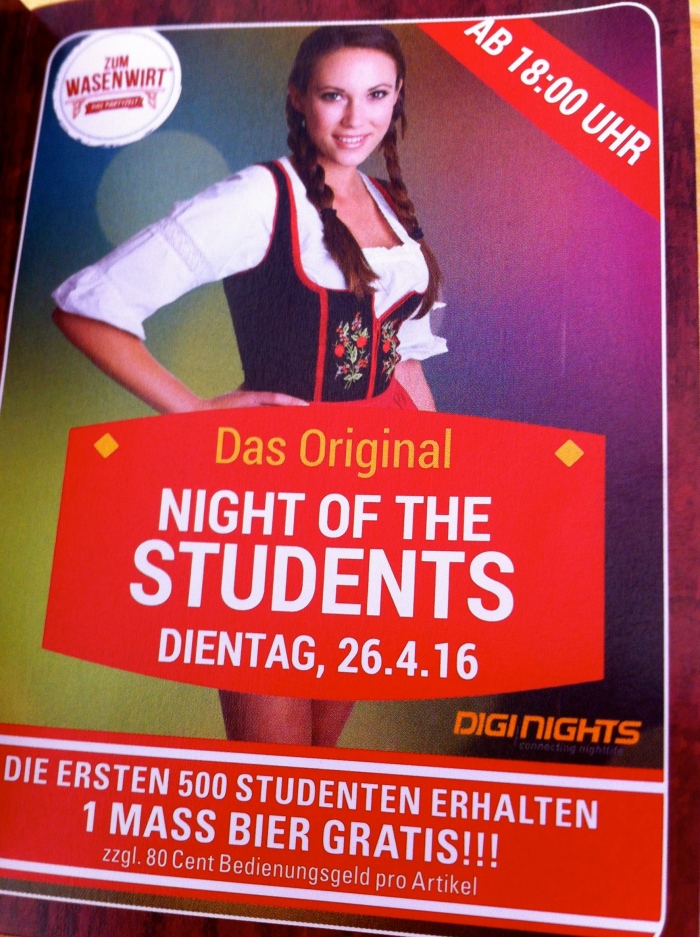 Eberhard remarks that the girls don’t look 18 (the minimum age for admission to the beer tents), they all look younger — and that’s because it’s Student Night we learn, the first 500 get a free liter — and though we’re sitting at a table that has a reservation posted on it, the table’s not reserved until 1800 — and some girl with a mole comes up to Eberhard and says she has the table, she and all our friends, and Eberhard tells her it doesn’t matter, you don’t have it until 1800, and she sits down disgruntled, and as more of her friends come they shift their bodies further down the bench one by one until we’re pushed to the edge, and Eberhard and I take a selfie but I tell him we’re not worth the disc space, that we don’t matter.

The girls’ outfits are such you can see their birthmarks, as if we needed any excuse to feel older. The one next to me whips out something from her purse in a small, velvet bag and all of them start to coo: it’s a selfie-stick, and the others make dramatic sounds and clap as she extends it length by length until it’s a meter long and they all pause for a moment to pose and immortalize themselves.

Eberhard says that’s what Lily’s going to look like in five years and I laugh and give him the finger — and the cover band says the next song is by AC/DC, and the girls jump up on the table with their beers and their phones and lock elbows and sing, I’m on a HIGH way to HELL…and I tell Eberhard about my friend back home whose uncle wanted us to try to find him a beer he had in Germany and mail it to him, and that all the beers here taste the same: it’s the flavor of the memory he wants to taste, to take him back somewhere, more than the beer. And we’re just trying to recreate the first memory, even though we know we can’t. It’s the feeling of something the first time that makes it feel bigger, and each time after, we’re just making copies.