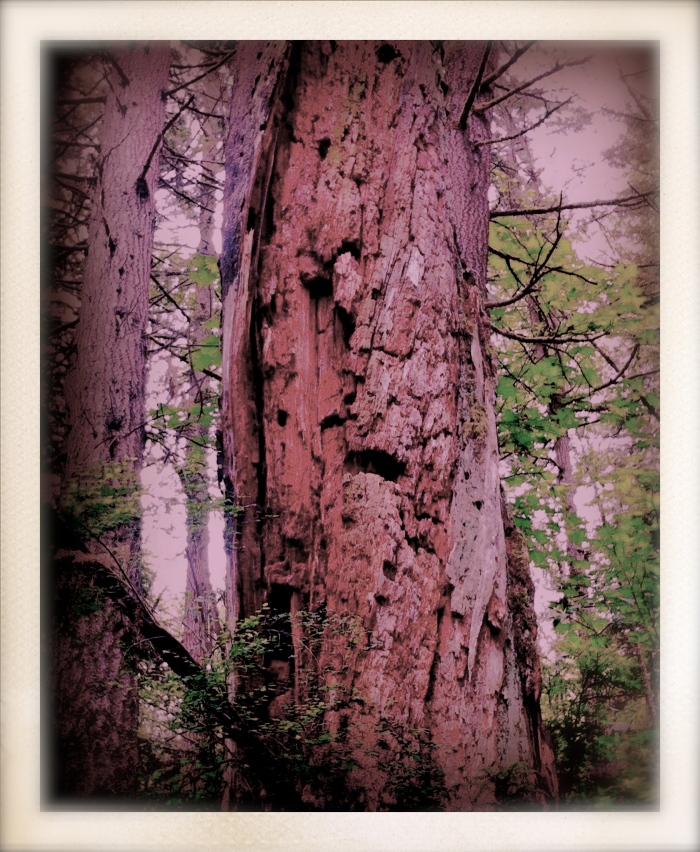 I took the Deceiver Trail, the S3, past the Licorice Fern cul-de-sac to a crumpled-up viewpoint where there wasn’t much to see but it sounded nice with the water collecting in a dark pool by a leaning sign, Far Country Falls.

It shouldn’t matter if I had a crush on my Yoga teacher but I probably did, which would explain why I tried so hard to make my body do things it wasn’t supposed to, things you can’t force. It took two or three teachers before I realized you can’t have the same mentality about Yoga as mountaineering, where I’d just treat my body like a game piece, like an action figure marching through some made-up campaign.

It was my teacher Charley, who kick-boxed and sometimes got into street fights and smoked, who taught me to stop being so hard on myself, to respect my body and listen. He had a baby face and a beer gut and often messed up poses when he was demonstrating, but you could tell when his shirt flipped up he was like a snake underneath, all muscle. There was a pose he’d ask me to show the class where I’d lie on my stomach with my hands braced under my groin, flip my legs over my head so they hung there as I balanced on my throat with my feet pointing like a stinger, which made me look like a backwards capital C or a scorpion but it wasn’t called that, it was called Locust for reasons I never understood; I’d never seen locusts, only heard them.

And Charley would ask in his gentle English voice why I insisted on sitting there like that before class in prayer pose or kneeling warrior or whatever, because I’d learned to do it that way at the other Yoga school and was trying to force my knees to splay outwards so my butt would touch the ground in hopes it would one day feel natural but it never did, and Charley would explain how I was over-stretching the tendons or destroying the cartilage and I would just smile and nod and keep doing it, and he never lost his patience but kept imploring me to please stop, until one day he put a foam block out in my spot before I got there and I tried it, and never went back. And now in the mornings when I first come down the stairs my knees kind of wince, like something’s missing that belongs there, the way car brakes squeal before they go out.

Charley and I got to be friends, normally the only two guys in the studio. He’d tell me about his girlfriend, pronouncing her name like it was a rare jewel, Amber, how it seemed they were always having problems but he really loved her, though sometimes I wondered.

And it was the fact he would fail in the poses, as if on purpose, that made it feel safe for us to try things we normally wouldn’t, that we were afraid of, and I wrote about him and thought about him often, how important it was for us to embrace that spirit of failure, how he taught me to stand on my head in the center of the room and not be afraid, he weaned me off my trust of the wall so I believed I could do it myself.

I wore a wife beater and a pair of green fisherman’s pants my friend Travis brought back from Vietnam and started going to the studio when there wasn’t any class, just standing on my head watching my reflection fanned out in an infinity mirror, and people would come by to look in and pause and think better of it, and often I had the place to myself, to get some fresh blood in my head before I went back to my desk.

When we started class, Charley had us lie on our backs and imagine our bodies were melting away layer by layer, visualizing the skin first, the muscle tissue dissolving, the bone turning to ash, until there was nothing left of us but a small pool. I thought of that pool by the leaning sign for the Far Country Falls and turned back to the Quarry Trail, to Fred’s Railroad, to Shy Bear Pass — past a boulder that looks like a sleeping giant, a troll under a bridge with fern fronds for hair, implied eyes like a Buddha, just sitting there satisfied in a moment of nothing more.

And I had to catch myself because I came upon a black snake on the trail that was long and colored like a garden hose with a green stripe, and when it paused to fix its eye on me I imagined it smiled before it disappeared and I thought about Charley and joked to myself, I wondered where you’d gone, old friend.