Home › musings › Faces in the driftwood the color of bone

Faces in the driftwood the color of bone

At the Starbucks in Aberdeen on the Washington peninsula halfway to the coast with the kids and Ginger, the condiment bar a shit-show, the aftermath of a frat party, a scene from Weird Science but with milk stains and sugar wrappers and straws stuffed down the mouth of the trash sticking out: Aberdeen, a town that could be cute when you first come but realize soon it’s not, it’s home to Kurt Cobain, a sign says welcome, and Come As You Are.

And it’s not long until you realize you’re in Hoquiam which promises to be The Friendliest City and that’s something I guess, if it’s all that you’ve got — signs for razor clams, firewood, rusted chain link fences and chainsaw art, plastic American flags in the dirt, spinning pinwheels, pull tabs, Christmas lights still out in June. I wonder if anyone’s got internet access and if they did, why they’d be outside when they could be in.

The feel of these towns established in the 1890s for logging, everyone rugged, you stop for gas and pay inside and it’s like they all know you’re not local, they just sense it.

It takes a good five hours to get to where we like to camp on the Washington coast, off the Hoh Indian res, across the Hoh river, that flows out of the largest glacier in the Olympic mountain range, which I crossed with Brad in 2009, 20 miles in, 20 miles out.

And there’s a real piece of chainsaw art at the mouth of the river that flows into the Pacific and makes for the best fishing, a bald eagle perched on a stump watching and waiting while her mate watches from above, a high tree with a nest, and they’re left to compete with the crows and cormorants and pelicans who arrive at high tide in squadrons, the same organized intensity as tribes in a Tolkien conflict who cooperate about as well, which is not at all.

On Day 2 I stop caring about getting sand in the tent and by the end of it I’m barefoot like the kids with sand in my scalp, the sleeping bags, the cooking utensils, the wet, dark sand.

Charlotte forages for rocks that might have crystals and breaks them open, pockets them, can be seen muttering to herself — and all of us have that maritime look that’s salty, moist, and stiff from bad sleep.

We take Ginger on a rock scramble at low tide around the bend to a shallow cove but it’s too much for her and I have to help her on some of the boulders; at the far end there’s a shallow stream of freshwater I remember, and take her there for a drink.

Socked-in most of the day with the marine layer but coming here never disappoints, it’s always my favorite. Maybe it’s the fact the trees come right up to the edge of the beach and hang off the top of the cliffs where the rock broke off and went god knows where, the beach a knotted thicket of logs, limbs and roots the color of bone, a maze of driftwood that’s good for practicing your balance, or like the puffy clouds you can see whatever you want to if you learn to let go. It seems the sun never sets this far north this time of year, it just goes slate gray, has us up again by six.

I watch the kids from the opposite side of the camp on the ground by the fire with a beer and Ginger sacked out in the sand burrowed in where it’s warm and nobody else but us, a garter snake when we first came, some deer, which is strange to see on the beach, they’re like spirits unsure of themselves or where they belong, they just flicker in and out, frightened.

Lily asks why we’re camping again so close to the last trip and I explain it’s because I may be working soon, I don’t know, and there’s nothing else we have planned: I have to keep reminding myself what day it is since I’ve lost my frame of reference, it’s like we’re in between squares on a calendar board that’s been suspended in time.

I let them graze on salted peanuts with hot cocoa for breakfast and the freeze-dried mac and cheese that says it serves three but they’ve polished it off and left me with a stick of pepperoni, some cheese, and my knife. I carry out a 30-pound piece of driftwood that looks like a statue, the Muppet character who played the uptight eagle, the face twisted and head a bit bulbous, and set it by the front door when we get home, a kind of ‘we’re different’ statement I’m trying to make in the suburbs.

Towns with names like Humptulips, Moclips, Taholah: signs for the Tsunami Evacuation Route that show a large wave cresting and points on the tips like jaws or fake fangs chasing a figure who’s run for higher ground.

Ginger leaps in the air when the tide comes in and her spine undulates like an eel, retrieves the frisbee, breaks the neck, paws the sand. It seems no matter how hard we try to bury it she finds our waste and digs it up, I try bagging and hanging it with a long stick on a log, but it’s a game at the fair with nothing to win.

And it was like a scene from Harry Potter where we all saw something different when we looked inside the sun-bleached wood: Lily, a mama deer attached to a baby deer, it presented itself to her like that and she made me see the same — but everywhere I look I just see weird faces that reflect some part of me I have to reconcile or collect to make myself whole, complete.

Outside it’s almost the Fourth and it seems everyone’s gone, it’s just the sound of crickets and crows, jets, the play set creaking, the neighbor’s wind chimes, the doleful sounds of the ones we made from the pieces we found that last time on the beach. 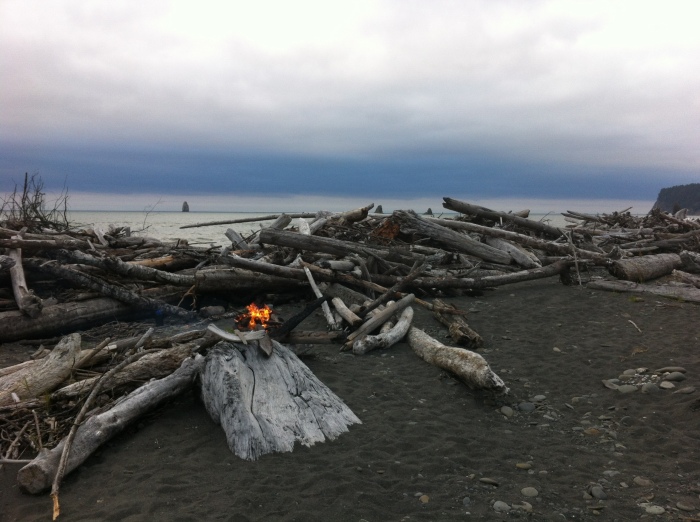 Like Loading...
‹ That last trip to Teanaway
How we managed to stay friends with the friends who rented our house ›