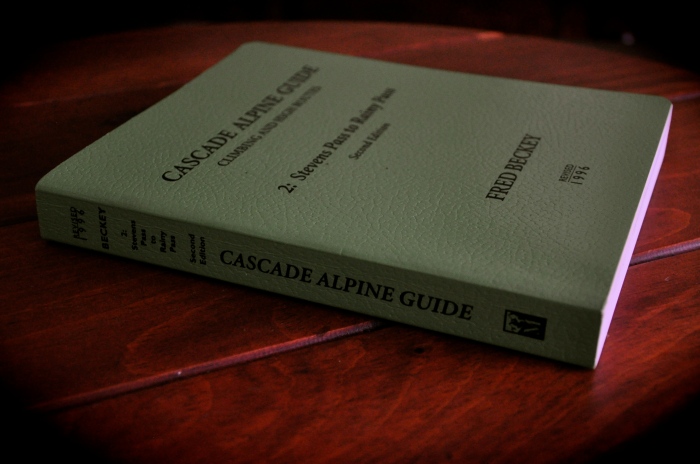 These posts are from a recent backpacking trip I made on the PCT with my dear friend Brad Shaffer. The post titles are taken from the great climber Fred Beckey from his Cascade Alpine Guide which I have no business owning. The posts are standalone but probably better if you can read them in order, going back if needed, or starting at the beginning. The series ends this Sunday.

When I took my socks and boots off my feet looked foreign to me, pale and shriveled as a newborn — the bites hardened and crusted over but my body didn’t need as much food now, it’s like it got more efficient, and we grazed on nuts and cheese, an English cheddar that crumbled and looked like the nearby schist on the cliff walls about to break off.

The two women in the camp next to us left and we moved in to take their spot because the sun was hitting ours and I emptied my bear canister to clean the contents with anti-bacterial wipes because the packet of smoked salmon I brought, though vacuum sealed, oozed fish oil all over everything and made us feel like bear bait, made everything in the canister taste like salmon.

Most of the food I brought didn’t need to be refrigerated and I assumed the food that did would reconstitute at night if it cooled down but it never did, so the cheese just continued to melt, and the boiled eggs looked suspicious, and Brad and I resolved to do our best to consume it all before we broke camp, taking turns on the salmon with our pocket knives but fastidious about cleaning the oil off, not smearing it on our shorts.

They say you’re supposed to consume like 6,000 calories per day when you’re backpacking but that’s impossible: on the first night neither Brad nor I had eaten much of anything, but made it 11 miles on energy gels and the beers we drank at each stop, to lighten my pack.

And though I’d prided myself on never getting a blister in almost 20 years of this, I discovered one at the river, an angry looking red marble on my heel, a sickly eye, milky and knotted.

Brad gave me an ointment and I used bandages from my first aid kit, wrapped it in duct tape, and we packed for the shuttle bus that comes up an old mining road along the PCT and carries hikers and sight-seers from the woods into the mountain town of Stehekin at the top of Lake Chelan.

We grabbed a table on the deck at the restaurant, Brad got a six-pack and a bag of chips, and we sat there for a few hours in our bare feet burping and making other sounds, talking to a couple through-hikers at another table, two guys in their late 20s doing around 40 miles a day who’d been on the trail since May and were almost done, killing time now in Stehekin drinking beer, waiting to meet friends at Rainy Pass for their final leg.

One of them was finishing Into The Wild on his Kindle, and I retold the part where Krakauer borrows his dad’s tent while trying some first ascent on a peak in Alaska but almost burns the tent down smoking a joint, catching it with the cherry, then summits the peak, but when he tries to talk about it in the local bar later no one cares or believes him.

There was also a Swiss guy who’d come up from Mexico and was about to finish, who’d started in April and averaged 30 miles/day (which you’d have to, to go 2,600 miles); Brad asked me if he could tell him the story about our first night out, how I had my privates exposed looking for a tick when another hiker came up the trail and saw me like that.

By the time we had to get ready for the shuttle to drop us at the trailhead the sun was low enough it was really hot again, well into the 90s, and we knew we had a thousand feet to go through a burn area where they’d had a forest fire in 2010, a couple miles up the valley to our camp. We finished the beer and each had burgers but that didn’t help, and we got on the bus and off again, and then everything went quiet except for the crickets and the mosquitoes, and off we went once more, back up the trail.

It was our last night together and a solemn feeling in the camp, which looked like it didn’t get much use but had nice fire rings with rusted steel grates you could raise and lower. A ptarmigan came up to greet us with its little headdress and the bats kicked up as the sun went down and we wondered how long until the moon came up, we’d probably be asleep, both of us wanted to get an early start the next day.

I made a small fire and boiled water for dinner and we hacked our way down to the creek to collect water for our gravity bags, to filter a good four quarts or so for the next day, which would be my longest stretch, nine miles and lots of gain over a 6,000′ mountain pass and down to an alpine lake where I had a permit to camp for the night.

Though the area was burned out and many of the trees blackened and ghostly looking some survived, little islands of trees that helped reseed the area, Brad noted. It was a vast valley surrounding us no camera could convey, and I had the sense it didn’t get much human contact, and there were likely all kinds of creatures in the sky and brush around us interested in our fire.

Brad copped to the fact it wasn’t his last pack of cigarettes, he had another stash, and returning from the creek we talked about addiction, his brother and sister, and could I relate, and we nestled in by the fire on a log bench and proceeded to take pulls off the tequila but couldn’t finish it — and I offered Brad a hip flask for his journey south, but he declined.

The moon lit the hillsides before we could actually see it and Brad pointed out Polaris, how you can spot it from the Big Dipper which I’d forgotten, and that was the direction I’d be going the next day — Brad back down to Stehekin and further south more than a hundred miles, back to work October 3.

When it was time to get up the moon was a pale brandy color picking up the morning sun, and I ate the last of the eggs and an energy gel, some coffee, and we hugged goodbye, I said hopefully it’s not our last time out and Brad said, you mean for the season, or for our lives — and as I left camp I joked I should get going before we start getting blue and singing Elton John songs, and we both riffed on “Daniel,” I can see the red tail-lights, I can see Daniel waving goodbye — and I let the rest of it play out in my head as I got back on the trail and climbed up to the pass. 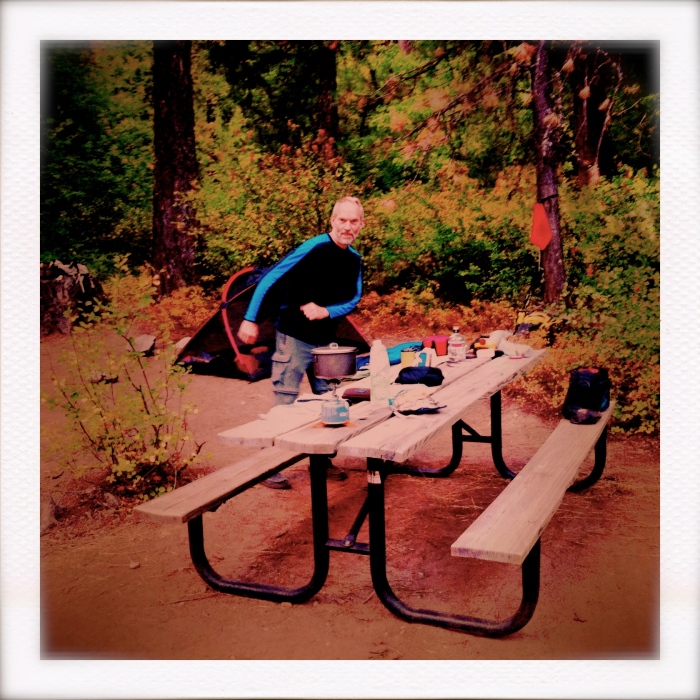