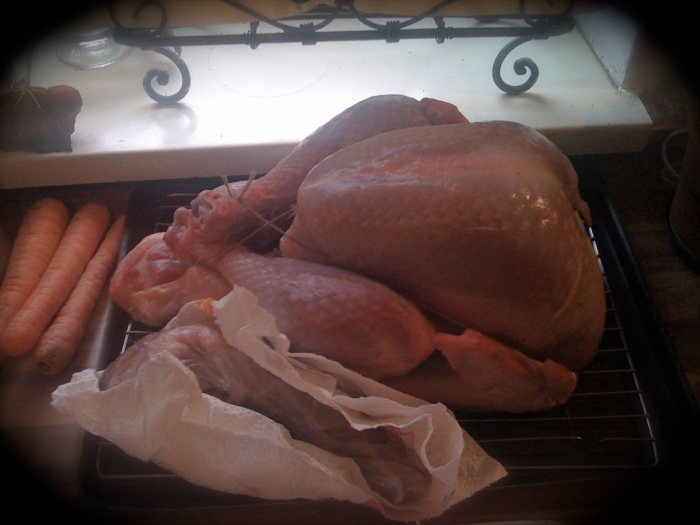 Rainy Thursday morning, Thanksgiving at the lake, all to myself. The level’s come up to the rocks, nowhere to sit. Ginger has a private crap somewhere in the trees. The rain makes a pattern across the surface, little black dots rippling, disappearing, followed by more, repeating. I think there might be something special I’ll see like a blue heron or eagle, but it’s only the ducks. I think about Alan, Heidi’s English husband over in Germany, that year we met and I kept him company in the kitchen while he made the gravy. He smoked right up until he died I think, some kind of cancer, and that was his last Christmas. He handled the turkey gizzards like they were jewels, almost a precious way he laid them out in the frying pan and stirred in the flour, balancing a cigarette in his lips and wincing as he stirred, the blood and the flour turning brown.

I met him once and that was it. He had a bad complexion and long, black hair. There would have been that scene right before we ate we all had our dishes served and held each other’s hands or made a toast and Alan smiled, and we started.

I took the gizzards out of the bag and laid them in the pan like the recipe said, and when the neck was cooked and cooled I stripped what meat I could from it, and used the knife like I was sharpening the tip of a wooden spear.

The last time I wrote in the cook book it said the year with an exclamation point, 2006, pointing at the roast turkey recipe, the James Beard preparation where you cook it on 400, remove the turkey from the oven three times, carefully flip it so it roasts evenly on all sides, a kind of manual, rotisserie effect.

And we touched on that year briefly but I don’t think Dawn or her mom wanted to talk about it much, it was the last one we had with her dad before he got sick, it was the best Thanksgiving because it was just the four of us and Lily, who was only 1, in our little house in West Seattle. The first time I roasted a turkey like that, and it came out so fast it was still light out when we carved it.

Beth said she heard about families not getting together for Thanksgiving this year because of political differences. It made me think of Orwell, of turning people against one another, that divisiveness, and how sad.

But as I walked back from the lake with my dog and the rain kicked up, I realized I was happy as hell, air drumming, thinking about a Morrissey interview my friend Kevin sent (it’s with Larry King), where they talk about Morrissey’s depression, the fact he’s OK when he goes out on stage, Larry gets him to admit he’s even happy performing: Morrissey nods and says yes he is, half-smiles, even.