Home › travel › On the way to Waterford

On the way to Waterford 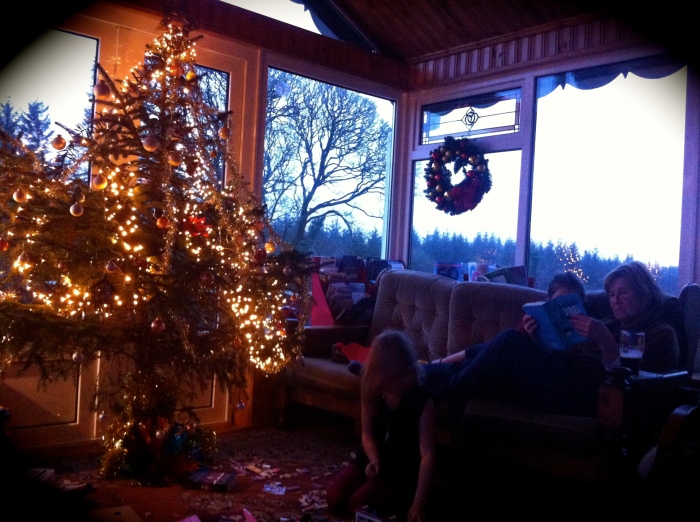 We dropped mom off at the airport in Cork, she flew back to Germany, and the rest of us carried on to Waterford, on the southern coast of Ireland. If the country is like the face of a clock, we went around the edge of it backwards, starting in the northeast at Belfast and Dublin, then over to Galway, down the southwest (where they filmed some of the Star Wars film), then back east where we ferried over to Wales.

Waterford was bleak post-Christmas and the crystal museum was closed, the only time of year it shuts down. It was a modern hotel with a crap bar but I resigned myself to it, I drank a lager there and watched the bartenders, some UK championship for dart-tossers on the TV, watched the others at the bar watching it, thought I’d sunk to a new low.

I got stuff at the convenience store we could eat in our hotel room, we were tired of going out. We’d been on the road since late October, driven into the bowels of Amsterdam, the pedestrian-only zone, misled by our GPS—driven around Scotland like the face of a clock too, zig-zagging through the Highlands, the cities, the strange, small towns the Scots looked confused by, why were we going there?

The morning we left the west of Cork we had all our things in the car but we didn’t know how to get back to the main road, it was too convoluted. They’d closed the other road because it was broken up from the flooding but that way was much shorter, and we knew the route, so I had to go for it, but the car got caught going uphill, it started to stick, and I had to say a small prayer and muscle it out of the broken asphalt and mud, and thank god it worked, we had no other options to get mom to the airport on time.

When I picked her up that night her plane landed near midnight, and she had a black eye from our dog Ginger, who’d pinned her in the doorway when she came home one night, so excited, and circling the dark roundabouts from the Cork airport, heading down a long hill to the harbor the cars were braking, there was some kind of accident or something, and then mom spotted it: a horse in the middle of the road scared, confused, all the cars braking around it, flickers of its eyes reflecting in the headlights, mom wanting to get out in the middle of the road and go rescue it but I said no, there was no rescuing it, and we carried on and she kept looking back, and I couldn’t help feel it was a metaphor for something I didn’t want to think about.

We drove into Skibbereen on Christmas Eve to get our groceries, my mom’s first time to Ireland (and she has red hair), and the sun was out and all the people, everyone was kind even though it was crowded: I’d read a local paper back at our rental that featured stories about some of the locals, their Christmas customs, and in town I recognized two of them from the paper and told them so, and they told me about themselves and really talked in a way I’m not used to, with strangers.

The farmhouse was propped up on a big piece of property surrounded by thin woods and rolling hills: it had a big veranda with a view we thought would be nice in the summer, that felt inhospitable in December with the wind and rain. I got bored and started rooting around in the back, a shed/barn thing, but it just had an old grill in it and a ping pong table with a broken leg, dusty spider webs. They left enough coal for one fire so we saved it for Christmas day. And I think now how strange, renting someone else’s house out for Christmas, the memories we made there: we left some behind and took whatever else we could with us.

Outside now, the skeletal hands clapping in the trees beckon me to walk back to the lake and see what I can see. Mom’s still in bed here and it’s time to make another pot of coffee. I finally came round to the last Bowie album and there’s something to that, someone who puts all they have into something, because they have to.