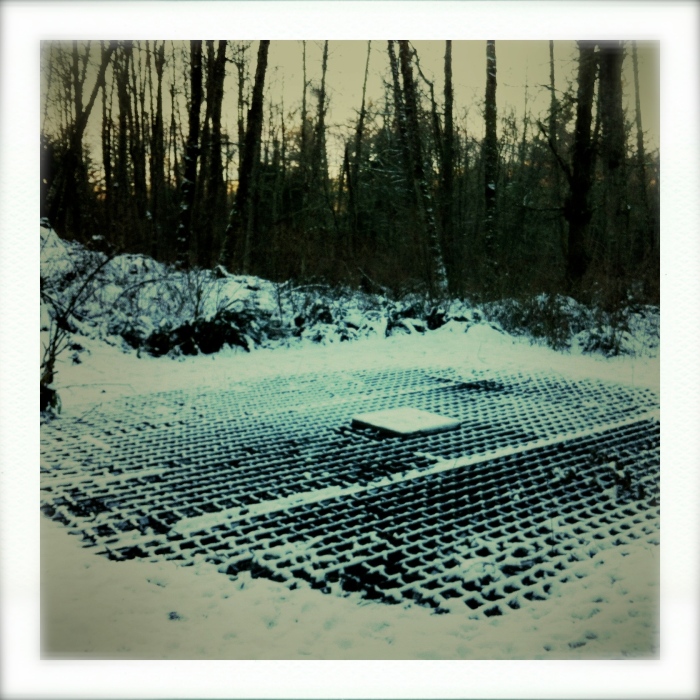 I took the 900 around the back side of Cougar Mountain, but it doesn’t get much direct light this time of year and the road was icy in early morning, with snow on the trees still—and when Ginger and I got to the parking lot we were the only ones at the trail head, we got on the plateau just after sunrise, but it was so low it was hard to tell if the sun was coming up or going down.

I had a pair of Yaktrax on (like cramp-ons but without the metal teeth, they’re steel coils instead), and they worked so well I could run on the icy trail, past the frozen marsh, out onto Clay Pit road that leads to more trails and peek-a-boo views of the mountains—and as I ran I felt strong, but remembered all the soft cheese and Port we consumed last month, how it was cold enough in the garage we could put the cheese there overnight and bring it in in the mornings so it could soften, but sometimes forgot and left it out a few days until it was like butter, and we spread it on crisps with tart cherries and homemade jam, smiled, said how glad we were.

I brought cold salmon with me on the trail and ate it with my fingers, let Ginger lick the oil, fed her the skins which are no good cold, they’re like chainmail armor, like something you’d use to scrub the inside of a cooking pot—and I hurried home for a Skype meeting at noon, took a hot bath, lay in bed, met Dawn in the den to denude the house of Christmas, had a moment with the tree when it was bare to say thanks—went for Charlotte at the bus stop and paused in the doorway thinking at last, I could be a model in one of those Ralph Lauren catalogues I’d always fantasized one day I’d be, with my scarf and my sweater, my chinos and hair combed back from the sink—but in the next frame, I knew I wasn’t as good looking or young (or rich), and met Charlotte at the bus who was just in a T-shirt and asked her why but she only scowled—and I told her we’d taken everything down and she seemed excited by that, she ran ahead with her backpack wobbling, and I wondered if she was clumsy or if all kids run like that.

And when I got to the front door the snow man collapsed, its head slid off in some impossible yoga pose that looked hard on the neck, the throat gone like the crows had gotten to it—and though we said we wanted to take stock of all our Christmas things this year we did the same as we always do, we jammed it all back willy-nilly: we rounded up all the glass balls and figurines like prisoners and stuffed them in boxes with ill-fitting lids, we threw them in the upper-loft next to Halloween and Easter—and Dawn took to vacuuming the pine needles with all the vigor of a dental hygienist getting in the cracks and crevices, but the vacuum started to make a rattling sound like something was wrong, and I had to get on top of it and look inside: I got a paring knife and cut the animal hair out and gathered it in a pile until it looked like a mouse corpse when it was all out—and I couldn’t stop picking at it, I was gritting my teeth, I had to be pried off and sit in the corner for a while, to catch my breath.

And I watched Ginger on the trail thinking she’s like me and my writer mind: she gets distracted by the remains of others, the cracks and crevices, ever watchful but likely to go off-route—seems happy and alive though, using her senses. 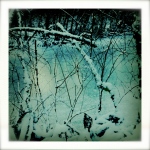 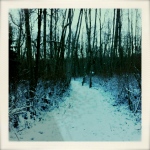