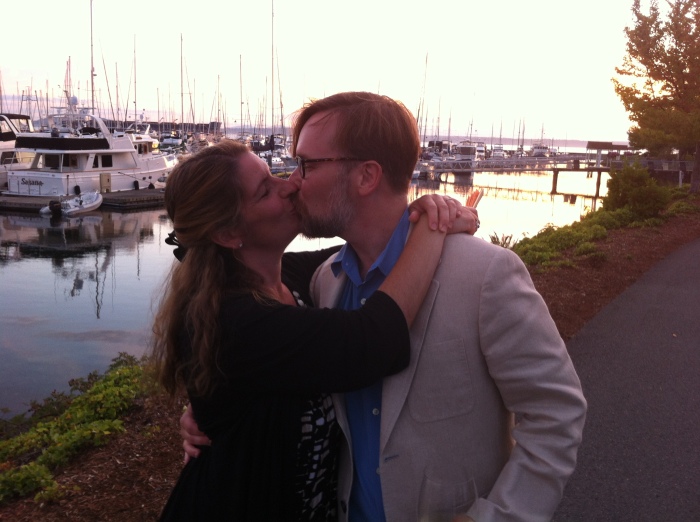 That April we got married the weather had been good every weekend three weekends in a row and I worried our luck would run out by our wedding day. There were about 50 people coming in to a mountain lodge in a small mining town called Gold Bar. It was the first time my mom and dad would see each other since they divorced, each with new partners. There are a lot things (like the weather) you can’t control, but we had fair skies literally and figuratively. A photo of Dawn and I with our heads thrown back doing a shot someone handed to us right after, some unnamed mountain in the background, wisps of fog. About 24 hours later, hurrying to the airport for Las Vegas and then renting a car around midnight to head to the national parks the following day. Our marriage started with a road trip.

I didn’t plan it so well. One thing I’d redo is actually calculating the time and distance between stops and limiting the amount of travel. The first place we stayed we got to right around dusk, some prairie outside of Moab with nothing but sky, fields, spring flowers, cattle. We had a little cabin with low lights, hardbound books, blankets, a bottle of wine—but had to leave in the morning for our next stop. I can’t remember any of it and digital cameras back then were crude, so there’s not much to go on.

The night before in Vegas, we’d stayed up late looking out over the city and trying to relax, feeling the adrenaline still and the deep fatigue that comes from all that stimulation. We’d left the lodge for a gathering at our small house in West Seattle before coming to Vegas, and there were many smallish kids, and I don’t do well in small spaces, was drinking wine like medicine.

But with all the sun that April the yard looked good, we had a couple California lilacs that gave off purple cluster blooms and attracted bees, and I’d sometimes sit under the bush listening to them, zoning out to the drone.

I discovered the footprint of a pond in that same spot—and the previous owners must have been pond enthusiasts, because they’d put in another pond right by the front door, which we tried to maintain and beautify, but it just didn’t work. A family of raccoons lived in the cedar tree out front and made a habit of coming down in the middle of the night to play and do whatever else, and in the morning it would look like hell.

We decided to empty the pond and demolish it, and I paved over it and put in a small patio there. I blew out the suspension on the Volvo hauling sand, rocks, and bricks back and forth. I blew out a disc in my back too, getting cocky moving boulders and using power equipment. And I didn’t have the patience to work out geometrically how some of the bricks should be cut for the places they didn’t tie in right to the existing footpath leading to the front door. I half-assed it, but the times I’ve gone back to that house for sentimental reasons, I notice the new owners still use it and haven’t done anything about it.

Maybe there’s a lesson about marriage in that patio and me putting it in: it’s the good ones that hold up over time, that last, despite your lack of planning and the imperfections you need to accept. And marriage is a kind of road trip too—best to like the person you’re in the front seat with, regardless of where you’re going.

Like Loading...
‹ ‘Most likely you go your way and I’ll go mine’
‘That you’re tired of yourself and all of your creations’ ›