Home › identity › ‘To become one with whatever one does’

‘To become one with whatever one does’ 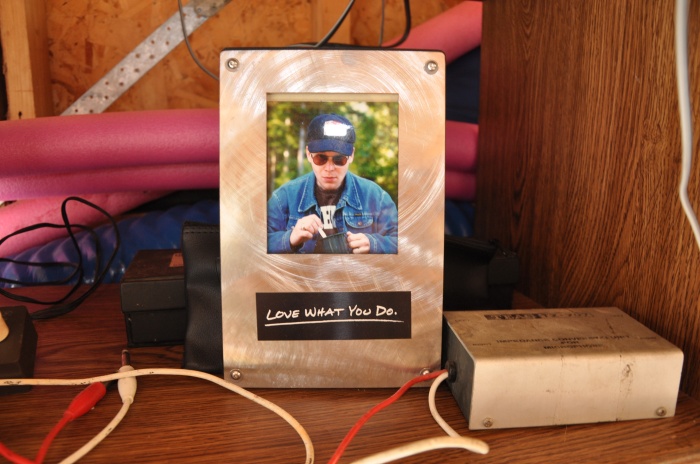 My first day consulting, it had been almost two years since I last worked. They welcomed me in, and the office reminded me of where I’d been so many years before. They were nice and we had lunch together in the cafeteria. And then I started asking them to do things and they ignored me or didn’t do it the way I asked and then I had to threaten them.

There’s a similarity with the cat going up against the dog, making oneself look bigger, hissing, showing its claws: a bluff, but necessary. Project managers rarely have real authority over people; it’s assumed or granted, but always earned, often tested. You earn it by making yourself look big, that way.

I started feeling comfortable there at work. I only went in a few days a week and the other days worked from home. Going in felt ceremonious, a big deal, getting ready. Half of Microsoft’s workforce is made up of vendors like me. They need the vendors obviously and clients like to have their vendors there on hand, but as a company they make a point to remind you you’re not really an employee, and that’s important for legal reasons. So you have to check in at reception and get an escort, and then you don’t have a desk but need to squat in the common areas between meetings, the discreet parts of the building.

I worked with contractors like that at Starbucks on a big IT project. I had a mentor who also worked in IT who was a real project manager pro, who gave me advice. He said maybe the project was too big, and he was right: it was the largest in scope and budget my department had ever done, and they were starting the implementation in China, planning for a ‘global instance’ and requirements that could transfer to EMEA, LatAm, Canada. There were two sets of contracting firms doing Agile-Light Hybrid vs. Waterfall, or something. They burned through a couple IT PMs. I felt bad for one who was my peer, she got let go, but she’d tried to make me look bad on something and lost my trust. She got replaced with a guy from IBM named Art, I secretly worshipped.

Art was smaller in stature, Asian descent, with visible tats on his forearms (dragons, Anime characters, stuff that didn’t look corporate really). In his auto-signature he had every professional certification possible, it spanned two lines. He seemed to really know his shit. But it was a steering committee meeting where he really impressed me, when he asked politely if he could get up and address some concerns ad lib style, and when he did, he owned the room.

I didn’t realize how politically charged those meetings could be, I wanted to deny politics, that was my tact. But there was a lot of posturing and passive aggressive or full-on aggressive charges being made between the business and IT. Basically, the project had gone on way too long without a real schedule. Art came in and built one, to the tune of several hundred lines, mapped back to quarter hour increments, with dependencies and logic, and it all made sense (at least to Art): the important thing was, it made sense to someone.

One of my VPs was casting doubt and Art fanned out the project plan, but spoke to it at the right level and gave assurance he was managing it, and I realized that’s what people really want: they sure as hell don’t want to dig into your project plan, they just need to know you’ve dug into it.

I’d see Art by the food trucks or in the cafeteria and he was often alone, on his phone. I wanted to take him in, give him company. I also wanted to see what made him tick, I probably yearned to be as good at something as he was, at his job.

I took him to lunch at an Asian restaurant and we made small talk but it was odd. And we never quite connected, I think because Art didn’t really want to. And often, as I’m walking through the Microsoft cafeteria not making eye contact with others now I think about Art, and understand him more, why he kept his distance.

Since that first day I started this gig I wanted to feel comfortable and accepted but as I continue on, I feel the need less so. I’m not planning to go back to a full time, brick-and-mortar job. There’s the potential for more security, but I’m suspicious of that. The brick-and-mortar means at least 40 hours a week plus commute time, and then the expectation you’re available outside of that too. You just can’t get as much work done in 40 hours at an office vs. home, period.

I used to flip my badge around so no one could see I was a contractor (they’re different colors for vendors vs. full time) but now I don’t, I wear the sticker reception gives me on my shirt, and keep my jacket with me at all times. That feels good, I can leave whenever I want. I’d like to think that whatever I am or do is permanent outside of work, and the rest of this is just temporary.

I read in a book Brad gave to me just now, “to become one with whatever one does is a true realization of the Way.”

Keep your jacket nearby and your pen in your pocket, and remember they can cut your access anytime they want, and you can do the same.