Home › identity › Field notes from the Pacific Coast | 101 to Aberdeen

Field notes from the Pacific Coast | 101 to Aberdeen 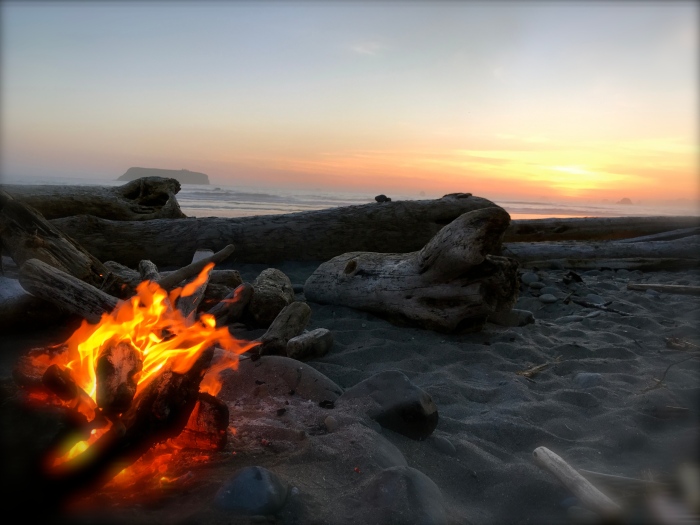 This is a series of posts from three days out on my favorite stretch of the Pacific Coast. The posts don’t need to be read in order and serve as a memoir experiment with side-stories from related trips and themes related to aging, identity/names, our relationship with time…the nature of faith—thanks for reading! Bill

If you’re going to hike the full 17 miles from Oil City to Third Beach, there are three creeks to cross that are tidally influenced. That means at high tide, the creeks are obviously higher, though I don’t know if that’s because the ocean is pulling the water level and creek up higher from the source, or if the ocean itself is co-mingling with fresh water. At the base of the hike on the southern end at Oil City, the Hoh river flows from nearby Mount Olympus off the Blue Glacier, which I crossed with Brad in 2009, the largest one on the peninsula. Because it comes off the glacier, the Hoh has that cool blue-silver color, turquoise at times, and that’s from the broken down silt the glacier carries and crushes slowly over time to make a gray-brown slurry.

The map says “no oil, no city” at the base of the hike. Driving in there’s just an RV and encampment with a sign on the ungraded road that says “Congested Area,” because I think the guy has chickens and cattle, or wild dogs, and a lot of firewood right by the road, so close you could reach out and snag it.

And they called it Oil City to entice people to go there way back but it never panned out, and now I think the name has the opposite effect, it keeps people out. Just this guy and his version of paradise, which I thought about hiking in, is paradise the absence of others, just you and the wild—or just you and another person, to make more?

If you’re going to climb Mount Olympus it’s an 18 mile hike just to the glacier crossing, up the Hoh river valley, the Hoh rain forest. And Hoh is the name of an Indian tribe, they own the land along the forest so if you do the coastal hike to Third Beach you need to leave a car at one end and negotiate with tribespeople to convey your party back via taxi, or pay them to look after your car so no one burgles it.

Because I came straight from work I had to hide my laptop in the Volvo somewhere, and took a lot of time thinking about that, and landed on the floor mat in the passenger’s side, I stowed it under there with a water bottle and some underwear on top, to make it look uninviting.

And they wanted you to register for an overnight camp with a small fee, but there was no pen in the box and I was so anxious to get going I didn’t want to go back to the car, so I took a permit and stowed it in my pocket and prepared an excuse if I got stopped, which has never happened in all the times I’ve been there before.

In fact, I hiked about four hours before I saw anyone: three guys in their 20s, glazed over in their camp at Mosquito Creek. They said you’re lucky man, you got here right before dark. But then dark took hours to come, still. And it reminded me of Alaska, the kind of dark you wait forever for and then it’s only that way a little time before it gets light again.

Driving out, there’s a psychological separation once you break off the 5 by Olympia and take the 101 toward Aberdeen. There was a time I drove from work many years ago and was so excited, I needed so badly to get out, I stuck my head up through the sun roof with my hands on the wheel and howled, just held my face in the air like a dog: I did that again this time to see what it was like, and when I got to the coast there were trees along the cliffs that were slanted and looked frozen sideways from the constant off-shore breeze, and I thought my head and hair probably looked the same.

I drove all the way from Redmond to Aberdeen before stopping at the Starbucks so I could change in the bathroom and get a coffee, check the internet one last time for the tide tables, sign off from work.

Aberdeen is one of those towns coming in where you think it could be cute but instantly realize it’s not, and never will be. But there aren’t many places to get gas once you’re past it, so I always top off there, as an excuse to pick up some local color or buy a new lighter, and they were playing Aerosmith loud on the overhead speakers, and I had to wonder if the shop owner had a gun behind the counter, I got the sense from him he did.

There were lots of places to buy weed though, well signed. And it always made me think of our old neighbor Curry from West Seattle, who was on the music scene as a studio engineer and basically just a cool guy embedded in the grunge scene, had a tattoo of a rooster after the Alice in Chains song, chewed tobacco still, had the grains of it often caught in his teeth.

Curry wore that same desperation from Aberdeen, I thought. You get desensitized from the lopped-off trees all around, the stumps and piles decomposing, the lumber mills—all those big trees broken down and packaged up, and there’s something ominous about being the largest lumber town in the world, having that define you.

I got over the rock scramble at low tide and climbed the rope ladder up the bluff to the overland trail, and through the large, old-growth forest, about three miles to Mosquito Creek, another place with a name I thought someone gave as an inside joke, to keep people out.

And I wondered at all those trees, if I was just some bug on their backs: and my pack didn’t feel great, I couldn’t make peace with the rubbing and top-heavy weight from all the beers but I made good time, I hoped to make camp in time for sunset, there were a few fingers left over the ocean: and after a couple hours I got into a groove, my gait a manly, soldier’s stride: and I thought of the film 300, a romanticized Trojan army scene with bronze breast plates and waving broad swords, singing: chiseled, bearded men off to kill, to die trying, the glory of it, to be a man…and all the way up, a good two hours or more, I had the song “Hunger Strike” in my head, that same chord progression turning over and over…Chris Cornell, Eddie Vedder learning to sing the way you might in the shower with those dramatic lows and crazy highs…and then I went down wrong on my ankle and twisted and fell on my side in the sword ferns groaning and wondered how I’d make it out alive with no cell phone coverage or trekking poles, but then just stood and tested my weight on it and it was fine, I hiked on.

The drive and hike out along the coast allow peek-a-boo views of the ocean as you straddle the road or trail like a striptease, a slow unravelling, and then you come to a vista where it’s just the ocean and the sun a pink, flattened disc, and sea stacks like prehistoric dragon teeth sticking out, molars, all of them with tufts of trees hanging on, each with an eagle perched there, looking on.

I hiked down to the beach from the established sites at Mosquito Creek where they advertise a pit toilet and that’s about it, you have to filter your own water from the fresh water creek—I remembered camps on the beach from last time we were there, now 15 years, and there on the other side of the creek ford was an area against a rock outcropping up high enough from the tide you were safe, and a fire ring, a good, flat sandy spot for my bivy sack and sleeping bag.

I threw my pack on the sand hungry, aching, out of water, and took to gathering wood for a fire, got it going in time for the first star or planet—and changed my socks, ate again, thought I’d try to break camp in the morning by 8, calculated how far I could get north with the tide tables, the other creek crossings, if I could go all the way to Toleak Point or further, to tag the top end of the hike with just my fanny pack—or if I’d take it easy instead and just lay around camp drinking beer, day-dreaming, only myself to reckon with.