Field notes from the Pacific Coast (day 3 of 40) 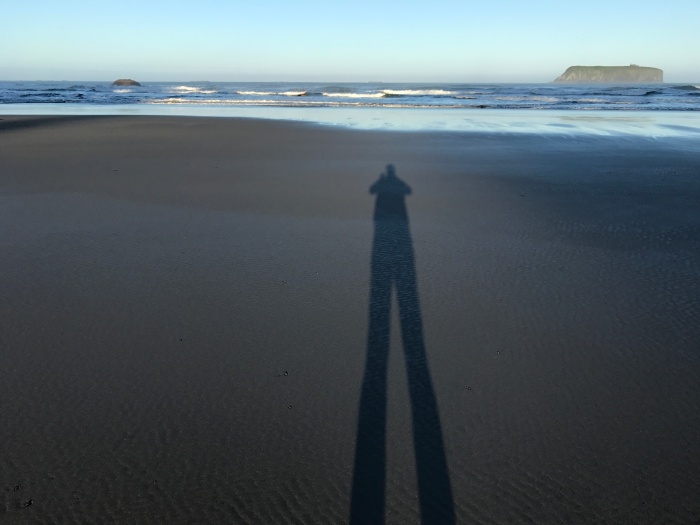 I cleaned out the refrigerator, what I didn’t think Dawn or the kids would eat while I was gone, put it in a cooler with a freezer pack while I was at work then got it out once I came to the trail head, reconciled my things fast, put all the food in my bear canister, packed my sleeping bag in a compression sack and stuffed it at the bottom to balance out the load.

And I stood there by my car in the quiet at the small, dirt parking area eating the last of the grilled steelhead fillet that was still cool, the oils of it congealed to a brown jelly; I’d read it’s those ‘good fats’ animals need to keep going, they last a long time. And it made for good, backcountry burps a few hours in once I got to the overland trail past Jefferson Cove.

There are sections of this trail with short-cuts you can take along the beach versus going the overland route, which require some uphill and theoretically take longer but I’ve never bothered with the short-cuts. They warn that the tides can change quickly and then you get cut-off or stuck along the rocks, and there are danger signs with stick figures I could easily imagine myself reduced to. And there was a small sign at the trailhead that said the lower trail out of Mosquito Creek was washed out, so it wasn’t even an option.

I came to an elbow in the trail at the start, a familiar place with a lookout over the Hoh river and beyond, all the way up the valley where you could imagine the source, on Mount Olympus.

But when I looked down the memory wasn’t the same, I’d always thought the river was much further down but now it was like right there, so close you could hop right in. Or maybe just the river was higher.

It’s the spot we’d always stop on the way out when I brought Dawn and the kids, my place to say goodbye for the season. Those goodbyes were heavy, symbolic, the way I’d sometimes feel when Christmas was over, the end of an era.

It’s an 11 mile, unpaved road off the 101 that goes by the Cottonwood Correction Center: a place I’ve never had any interest to see—but when you get to that dirt parking area, just a pit toilet and turnaround, it’s only a 20 minute, easy hike to a wild beach with a logjam where the river meets the ocean, raptors and cormorants on the rocks and trees, fishing.

The memories of our visits got co-mingled and I worried that Lily, our oldest, would lose interest in coming back. Getting the kids into hiking was a marketing campaign I worked hard at, and started with crude reward systems, like buying them sweets, hot cocoa, fleece jackets, new shoes: whatever it took, I was shameless.

But it was the appeal of rock hounding or playing in the sand that hooked them, and stopping on our way out at the Kalaloch Lodge for a breakfast or warm meal. And I’d often get a beer and Dawn would offer to drive and I’d nap, and wake near Olympia, with a couple hours to go still.

I got to the other side of the rock scramble and was glad for that. It’s the one part of the trail where you can really get hurt, and ever since Loren and I got stuck there with the tide, and had a moment of real terror, I always time it at the lowest tide.

It looks like a part of the land just broke into a massive clot of boulders, many volcanic, covered in lichen and barnacles—sharp, oily things you generally don’t want to touch.

But you can get into a groove rock-hopping if you trust your balance and footing, and go pretty quickly. Or you can fall pretty quickly, which I’ve started doing now more that I’m not as nimble.

What makes it hard with the tide is it forces you further inland to a narrow route and rocks you have to climb over using your hands; and with the ocean it obviously makes things more dramatic and the surfaces more slippery. On the other side is a cove where I’ve camped, and while it’s private and secluded, I found it real lonely the one night I was there before.

I got my pack off and was hot, stripped down from my trekking pants and got out the shorts with the inner-underwear that negates the need for a separate pair (it’s those runner’s shorts with the dual wicking system)—and one of the beers in my pack was leaking but I found it, a pin-hole hiss. And it was one of the strong ones, which I thought meant something (I had to drink it now), so I got naked and sat there with it laughing, shaking my head at my circumstance, so happy to be here away from it all. And each time I felt that way, I got to missing things more.

I calculated I could get into camp around 9 PM in time for the sunset, it seemed to take forever this time of year, so far north and west—but in the mornings the sun was all business, it had me and Dawn up by 5, out of bed shortly thereafter—and though there were steps we could take to blot it out and sleep in, we took full advantage, like we were harvesting the sun and needed to, to dry out our wet, sad souls.

Left then alone at camp with nothing really I needed to do, it was just me and time, my love relationship with it, my constant need to control and master it—and still I could not fully settle into that dance, we stepped on each other’s toes, we fumbled, and I knew at the very end in some dark sense it would come down to that, time: there was always somewhere else I needed to be, we would never really understand each other.

Sure, I paced camp like a ghost, I got bored: I gathered firewood well before I had to, there was still light. It was that blue-orange, ghostly pale light that hangs on forever, that narrows to a thin halo in a corner of the sky. And when the tide came in, the color of the surf looked silver for what light it took from the sky, and I staggered from my fatigue and the wonder of it all, and the rye whiskey, and fed the fire more and more, a clump of some dried-up kelp or seaweed shit that looked like something I pulled out of our shower drain before I left as a kind thing I could do for Dawn, to untangle that mess and maybe she’d notice the water didn’t pool so badly now—and it smelled bad but burned great, and smoked.

And there was no moon that night but stars, and a satellite that moved like a spaceship or faerie, at times it looked far away and others, real close. I wondered what they do up there, and if it was recording me. I got into my bivy sack and had no fear, though I was exposed to it all. And I was all alone but not lonely, there were some things I needed to work out.