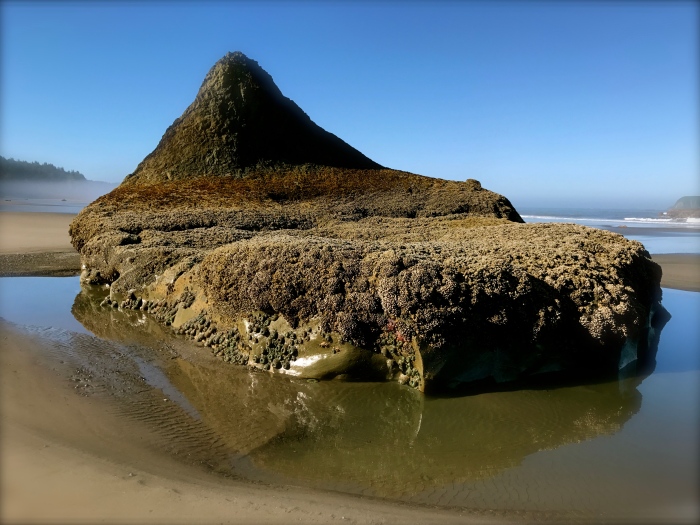 This is a series of posts I started in late May and plan to continue for 40 days, with a goal of hitting 50,000 words by July 5. It’s inspired by a three-day solo trek on the Washington coast, with side-story memoir scenes wrapped by a few themes. I’m writing each post live, pulling in stories I’ve drafted before or I’m writing for the first time, for this project. You can come and go (it’s non-linear) or start at the beginning here, which is really the end.

I woke early and didn’t feel great, I checked the time. The sun was coming up over the lip of a hill behind me, spidering through the trees and mist. I grabbed my camera and went out to the beach, low tide. Some bird squawks and cloud squalls, not much more. A little lapping, clapping sounds on the shore, then the broader applause going out. It echoed off the trees like the waves were coming from the wrong direction, behind me. It seemed like the waves were coming from all around, with me in the middle.

I went to the creek to check it out, it was ‘tidally influenced’ and I wondered what that meant, this time of day. The creek was reduced down to a channel just wide enough you’d have to jump across to clear it. It was a brown-gray slurry of deep, fast-running current. The sand on either side had that striated look of dunes, etched like elephant hide.

I got down and put my head in the water so it flowed up my nose like a Neti pot. And then I flung my head back so the water spiraled off of me and I grunted and groaned, and did it again. I looked around, 6:30. I got naked and got in, squatted down; it was like a bidet, but better. And I ambled out of the water in this kind of heavy strut like an orc prison guard, all business—and sensed someone behind me and turned, and there was a figure on the hill looking down on me who paused and turned away, an inch tall.

There was nothing but time, but still I demanded it. I decided to break camp by 8 and head north, and when I checked my phone I was within two minutes of the hour. I followed two figures up the steamy shore but lost one, and the other passed me heading south, didn’t look up.

Then I worried I’d missed the sign for the overland trail: you can take the beach routes for certain segments but also get trapped if the tide comes in. It takes a long time for the tide to change, but I didn’t read the trail description for this stretch because I hadn’t planned to come so far, past Mosquito Creek.

There were two figures moving by a large rock at what looked like the end of the beach. I wondered how they’d gotten there, must be from the north, because I didn’t see them pass me on the beach. I waved, but one just turned and didn’t wave back.

I was proud of myself for just having a fanny pack. I could go far and fast. I’d get odd looks from people on the trail, for being so remote with so little to carry. I had a new water filtering system that’s just a plastic bag with a pen on the end that looks like some surgical or medical attachment you’d expect to see in a hospital and looks vaguely profane, like a Hookah attachment. You collect water with one bottle, pour it into the bag, put the pen on and squeeze—easy, light. I think the through-hikers on the PCT were all using those now Brad said, so I felt current, for once.

I checked the time, an hour from camp to this rock: and up the ladder I went, stopping at the top to check my breath: too lazy to get my gloves out for the rope, even though the blisters on my hands were still raw from splitting wood last weekend. I wanted to toughen myself up. I’d had that idea before, but it wasn’t necessarily good, that you could harden the soles of your feet by walking barefoot on challenging surfaces. I did that at the beach in Ocean City; my friend Scott Reinhart said you just walk around barefoot on the hot pavement for a while and then you get used to it. And I tried that with a new pair of mountaineering boots once: I took a city walk with them and no socks, but it rubbed me raw…and when I told my climbing friend Elizabeth, who knew a lot more than me, she just nodded and said I’ve never heard of that, and looked away.

By the time I got to Toleak Point I’d come three or four miles already, it was hard to tell. I didn’t have a good map but didn’t think I needed one, you just go north and south and it’s pretty obvious which is which by what side the ocean’s on.

But knowing the high tide was around 2 PM, that committed me to the northern stretch as there were two creeks to cross near camp, Goodman and Falls Creek, and when I crossed them heading north one was thigh-high, and I wondered what it would do at high tide, and didn’t really feel like dealing with that.

I used to get paranoid about getting my socks and boots wet, I used to think terrible things would happen. I went to great lengths to stay dry. I think I had from the Mountaineers this deep-seated fear of hypothermia, especially in the Pacific Northwest, where it’s often prime conditions for that, like 40 and 50 degrees, damp, “rain changing to showers, showers changing to rain.”

I decided to just go across the creek in my boots though, to not take them off: what’s the worst that can happen? Blisters, discomfort? Rot? And maybe getting my feet wet would be a good thing, for those hot stretches on the beach.

By the time I got to Toleak Point it was still early and I couldn’t make out how I’d gotten there so fast in just a couple hours. I started thinking I could go all the way to the end, 17 miles from Oil City to Third Beach—here I’d come a good eight or nine already, no problem. I imagined going to Third Beach, tagging it and coming back, how proud I’d be.

I looked down at Toleak Point and the steep ladder off the bluff leading to the sand. We’d been here before, when we climbed it south to north: me, Dawn, Travis, Mike, and Brad. 15 years ago, now. I didn’t remember any of it, this beach, and there was a part of me saying it’s the same as the beach you just came from, turn back, so I did.

I hurried back to Mosquito Creek and at times I ran. When I got to the second creek crossing it was near up to my crotch and noticeably stronger, the current. I moved the way a running back does in the NFL, I saw myself breaking tackles, faking left, faking right: that determination to plow forward like a bull, the forward momentum of man-weight. I felt strong and young. My right knee ached from ill-advised Yoga moves but I didn’t care. I was so much more than a bad knee. I grabbed holds in the mud, the tree roots, sometimes ignoring the rope in favor of harder routes, natural holds. I thought all kinds of things, I went way back. Everything triggered another place, another time. The sword ferns were prehistoric and with no one around, the woodland creatures came out on their branches like a Disney film to admire me like I was someone special. I got mud on me and thought I was Rambo. I gouged my knee and it bled but it was fine, it didn’t hurt. Anyone I encountered would have me to face, all the wrath I had no where to put.

I belayed down the bluff back to the rock where I saw the others before, where I’d left my traveler mug with a couple pieces of driftwood to indicate my leaving it there was deliberate. There was a swallow of coffee left, still warm. It was sour and tasted like shit. I checked the time and tried to slow down, realized I’d get back to camp by noon, and then what. Nothing was stopping me from a good, long swim.