The Cascadian fault | Field notes from the Pacific coast 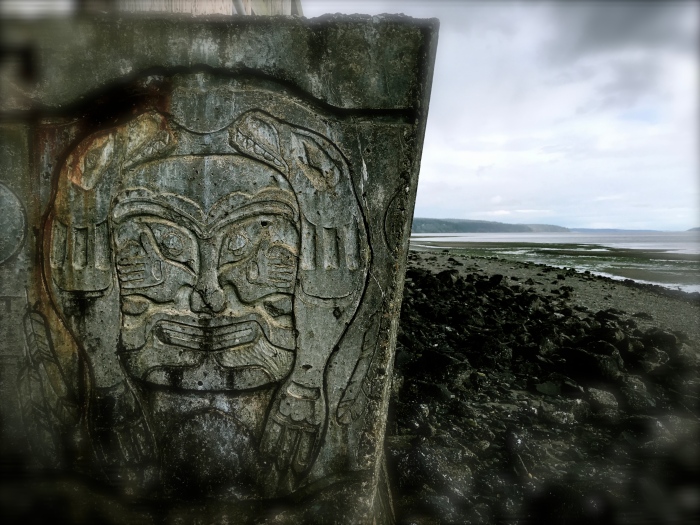 This is a series of posts I started in late May and plan to continue for 40 days, with a goal of hitting 50,000 words by July 5 (Day 27!). It’s inspired by a three-day solo trek on the Washington coast, with side-story memoir scenes wrapped by a few themes. I’m writing each post live, pulling in stories I’ve drafted before or I’m writing for the first time, for this project. You can come and go (it’s non-linear) or start at the beginning here, which is really the end.

The earthquake came the last day in February 2001, named “the Nisqually” after a delta on the southern end of Puget Sound near the ports of Seattle and Tacoma. Our office building was in the SODO neighborhood (“south of the dome”), named after a sports complex they imploded in the year 2000. People held implosion parties to watch the footage as it blew up (or “blew in”), but underestimated the amount of dust that would come shooting out, causing panic to early morning partygoers near the blast site, that Sunday.

It was the first time I heard you could mourn for your own death, which seemed strange to me. It wasn’t the earthquake that did that to me but the accident my friend Chris’s wife Wendy got into a few weeks prior, the combination of the two, to where it seemed like things were caving in, and we were so young, just 30.

Chris called me at work that Monday saying plans were off for Dungeons & Dragons, he’d just gotten word Wendy was in an accident and getting air-lifted out. He was hurried, asked could I look after their place for a while, didn’t know when he was coming back.

Wendy worked for the park service at Crater Lake in Oregon and was on an icy road driving in to work when an oncoming car lost control and hit hers, and the force of the impact caused her head to snap forward and break an artery in her neck, causing a stroke. She was in a coma with part of her skull removed, on ice.

When the earthquake came I was at my desk but soon got under it, the eighth floor of a building from the year 1919, the year my grandfather was born, shaking like a wonton on landfill put there by the Denny regrade project, to extend the shorefront of Seattle into the Duwamish, an industrialized estuary with abandoned railroad tracks criss-crossing the macadam, boxcars beneath cranes like Star Wars AT-AT Walkers, tiny men in pods operating them hundreds of feet off the ground.

It was my first major earthquake, where we had to evacuate the building. Because of the dust from the mortar and the rubbing of all the bricks, we couldn’t see down the emergency exit and there was a sense of panic, everyone congested, in shock. I led a party across the creative studio on the seventh floor to another exit sign, glowing mint-green: and when we got outside in the parking lot by the Sears and Home Depot my colleague Doris was standing there ashen, reduced to a 12-year-old, crying: and a guy in a vest ran over and yelled at us to get away from the building, get away now.

When I got back to our apartment in Wallingford there were messages on the machine but I couldn’t remember the access code to hear them. Nothing looked damaged, just a rubber tree frond on the floor, looked like a picture fell off the wall but the rubber tree broke its fall, still intact. The cats were burrowed into a crack in the bedroom closet, and after some time Dawn and I finally talked: she said a local news station had reported the SODO building collapsed, and assumed I did, with it.

But on that day Chris was ecstatic about the earthquake. Wendy had been in a coma for three weeks but the movement roused her—he thought it was a sign, possibly saved her life. She was coming around, was going to get through this, he said. And he said it loud and with conviction, to make it so.

I started seeing a therapist through a program at work they funded called the EAP (employee assistance program): the therapist, when I told her I couldn’t understand why I was so sad by all this, said it’s because you’re mourning for your own death, and I thought how strange, how selfish.

And by the time 9/11 came the company had emergency procedures in place, at least a function set up to formally respond to disasters like that (“Business Continuity”), and my friend and former boss Jim Morgan was heading that up, he seemed to have a taste for things like that. It takes a kind of personality to spend most of your time planning for things that could go wrong.

And then there was the threat of anthrax poisoning by mail, of avian flu, of running short on respirator masks if a pandemic broke—and I started having strange dreams about Osama bin Laden, his face a spider or vampire, and I’d wake feeling bitten, cold, a patch on my skin dead, spreading…

I dreamt the sensation of falling through time and space, reliving the earthquake. In my dreams I saw nothing, it was all dark, but I knew what was happening: it was the same motion from a child’s toy structure stacked too high, buckling on its side, the slow, inevitable conclusion, my death, at the end. It was the same sensation I had under my desk feeling the building shake, the sense it wouldn’t stop, the back and forth swinging and shifting, of glass breaking—thinking wow, I’m going to die at work, surrounded by work-things. How sad and foreign, it seemed.

The film Crouching Tiger, Hidden Dragon came out that year and Travis and I went to see it; I imagined myself on screen like those characters leaping from roof to roof, swinging through the jungle on high tree tops, flying. I got deeper into my yoga practice and learned to stand on my head, to flip my legs over backwards like a scorpion. I thought I could be a superhero too if I trained long enough, believed I could.

And so it was, when Chris Cornell died and they said it was suicide it hit me hard for some reason—it was similar, unexpected, a trigger for something personal I identified with but couldn’t understand—thought I might if I could get out by myself for a few days on the coast, it was supposed to be nice finally, I could get away from work for a day.

We realized it was the same when we told people we were moving to Europe, they always imagined first if it was something they’d do—like they took our experience and turned it into a consideration for themselves first, in how they reacted. We relate to others by imagining ourselves doing the same.

Something about suicide, such a deliberate thing (some would call it “selfish”) triggered deep reflection for me. Like, how could you take this gift of life and destroy it so willingly? And to have such a good life on the surface, that seemed sadder. It’s not the surface where things happen of course, it’s beneath…like those plates shifting underground.

I thought myself selfish when the therapist told me that. To consider, I was more sad for myself than I was for Wendy and Chris. That I’d internalized her accident, put myself in her shoes. Growing up, my dad often accused me of that: he’d say you’re selfish (and was probably right) and over time I believed it, it was hard to separate the two (what’s true vs. what you’re made to believe)—and as I grew to be a man I didn’t know it at the time, but I’d learn to use that selfishness like a weapon. Like I’d been made to believe that, so…I would be that. It wasn’t his fault or mine, it just was. Or maybe it was our fault.