We fell asleep with the laptop on watching Bob Ross the painter dragging colors down to form a reflection, shapes along the shorelines in reverse.

And I went back to poking a coal of memory, a no-name place in the southwest of Scotland that Thanksgiving: the outline of a dimly lit doorway leading me there, the orange/pink glow of a lamp out back, all the castles, the estate houses made from the same tired-looking limestone that like the countryside looks battered down, but resolved to remain that way.

The estate house with its long road leading in, the drive that started that day in Edinburgh and led us west where we’d leave the country for Ireland next, then work our way from Dublin to Galway, south for Wexford, ferrying to Wales after Christmas—ending in England where we’d settle in for January, and try to relax.

I picked the chauffeur’s apartment because I liked the sound of it. And it looked spacious and moody, desolate: the photos on the VRBO of the surrounding gardens and knobby trees, the wood fire in the living room with its soft light. I thought it would be perfect to spend Thanksgiving there as a family, didn’t mind if the internet was slow.

But it was dark when we finally arrived and unclear if we were still on the road: the road dissolved to a mash-up of leaves and mud, and with the rain and wind we couldn’t see right, and I was frazzled from a day in the car, just wanted to get there and get out.

It was cold in the place but they had a bottle of wine, a handwritten note, a cake we descended upon called Victoria sponge made by the baker, covered in fresh cream and strawberries, with jam in the middle. 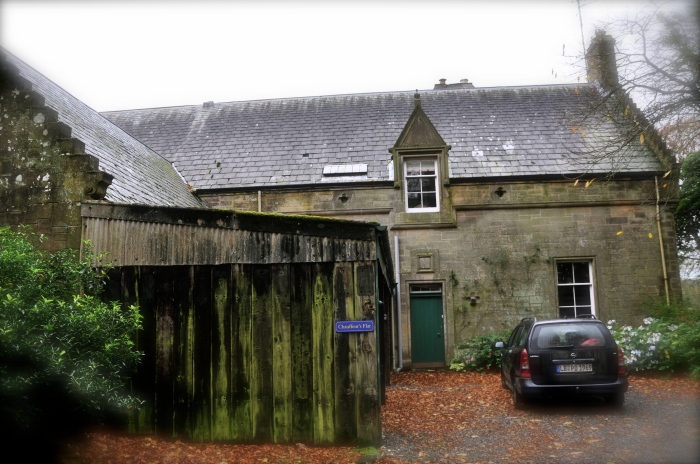 As I did with each rental (and by late November, it was our ninth), I got our things out of the car and went right back out to the store, often a Lidl, much like the one near my mom’s house in Germany, that made us feel both at home and distant from her—the fact we wanted to spend nine months in Germany but couldn’t without a visa, we had to leave for three months right in the middle of the nine, had to exit right over Christmas, and couldn’t come back until February.

The Lidl (like my mom’s in Germany) gets special foods around the holidays, and in the UK the emphasis is on game birds, leg of lamb, jellies, jams, accompaniments: potatoes in goose fat you just toss in the cooker.

But I got lost on my way back from the store, the navigator seemed off, and I sat in the car in the dark with the rain slapping the broadside, imagining the sea right there: we’d picked this place because it was close to the ferry routes to Ireland: and it was an angry November wind coming off the water, and I wondered what the hell I was doing, where I was going.

For three days we lay around the chauffeur’s flat, named for that express purpose: living quarters adjoined to the main estate, its tall windows and scenes we imagined inside but couldn’t really make out from the road—it made us feel a bit like intruders, having met the owners out on a walk once, when the man rolled down his car window and greeted us, invited us to stop in if we wanted, but we got the sense he didn’t mean it, and so we never did.

And yet, with all that space we had and the tall windows, sneaking peeks of the moon getting full through the trees, it felt timeless for Dawn and me: we wanted to come back when the kids were older, just the two of us, to spend a month and just be creative, write, there was a feeling about the place that allowed that: topical maps of the area framed in each room, unusual names of the nearby mountains and woods, the sense we could be far away from anything, anywhere we imagined.

On our last night the moon was full again, full when we left the Netherlands in late October and crossed the sea, full when we arrived in Germany, late July…and though the wind was up I had to get out in it, down a side road to the river, the woods we walked earlier in the day all muddy and queer-feeling, enough color in the leaves and trees still, you could imagine yourself in a painting, somewhere far away.

I stood beneath the trees in the wind with the moon and tried to drink it all in, to take what I could from it, what sense of god or purpose hid in those gray-blue eyes, a face that twists like it’s in pain…and beyond, the frame of the estate in the milky dark, the windows dim slivers…and next door, the house with Dawn and the girls on their recliners with books and puzzles and movies: it made me sad I had to be out here trying to find whatever it was I couldn’t inside.

In the ferry line the next morning Dawn said there’d been an attack in Paris last night, terrorists: we got off the boat in Belfast and made our way to the next rental, unloaded the car—I drove back out to the store, came home, made a fire.