No Christmas in Germany (14 Décembre) 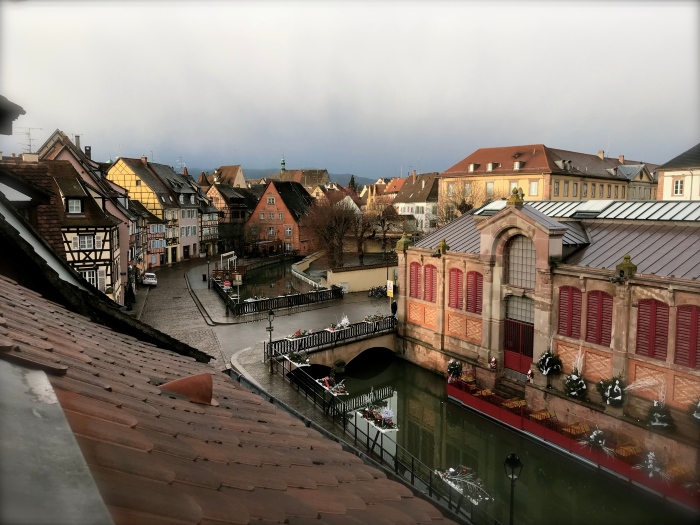 In the morning Dawn had a headache and I went out looking for aspirin and bottled water or coffee, but found none (it was before 8 and only the Tabacs were open, all they had were magazines and lighters). Rain on the cusp of snow and only kids out going to school, clumping around the canals. We’d gone out for lunch but split a bottle of wine and then the rest of the afternoon just walked through the markets, got some cheese and baguette, more wine for the apartment later. One of the cheeses was orange and soft inside, but when I bit into it it made me gag and I had to put it away. Dawn and I watched one of the X-Men films in bed, then she asked if I remembered seeing the first one, but I couldn’t. We’ve been together long enough there’s lots I don’t remember now, I said. The neighbors had the TV going and it sounded like it was right by our bed: the muffled sound of French dialogue, our neighbors narrating over it. After a while we got used to it.

It seems the gendarme are making a show of force with their rifles to help people feel safe in the Christmas markets here. They all look stern but terribly young and hard to get along with. Dawn joked, we can pretend we’re German trying to speak French and not have to let on we’re American. The town is not far from the German border, the Rhine river, and with the half-timbered homes it looks German, even some of the street names say Weg, for “way.”

The drive took a few hours and we had no problems getting here. When we crossed over the Rhine and the freeway signs changed to French there was a combination of filtered sun and rain/snow squalls coming over the mountains to the west, farmlands, roundabouts, small towns.

I told Dawn about the time I’d gone to Liverpool to see Loren play at an electronic music festival but afterwards he had other plans or something (was trying to get laid) and I spent the night in my apartment wondering what I was doing there, and where I was. And we felt a bit like that last night in bed, listening to the French TV next door.