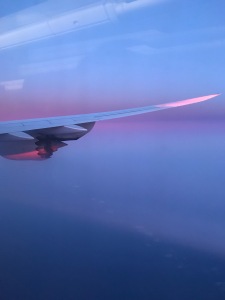 I made marrow soup for the first time (or released the marrow I guess, into a soup). And I took a hot bath and imagined myself settling into it the same as the chicken carcass, reduced. I flickered in and out on the sidewalk again today, unable to place myself in a distinct time. In my mind I wrote a blog post on LinkedIn from a cynic’s point of view, but cynicism doesn’t bring me any joy, it only dampens. Another friend and former colleague about to be let go, told “it isn’t personal.” I realized my capacity to love changed and I hadn’t realized that, hadn’t thought about it until it already happened. And there was no art in the fine details of the moss on the sidewalk or clouds, just a banal suburban walk. Dinner was hurried and “leftover” and I went upstairs for a bath and a book.

I got out the old Mac I bought in 2009 for our first sabbatical. I hadn’t used it in a few years, but it fired up after charging just a few minutes, and I checked the browsing history: all the detail from late July 2015 still, right before we moved to Germany for nine months. Lily was the age Charlotte is now, roughly 10. And the sites they were looking at, decidedly “10.” We’d gained and lost a fair amount in those years, the trade-offs that come with age and experience.

I think I figured out why I like writing memoir, because I have to patch together my past, and my past got scrambled the way a puzzle looks when all the pieces get dropped out of a box. There was a time it all fit together, but time cuts into things, it breaks your life into frames that are hard to put back together, to where they belong. Maybe I’m just a control freak. But I know I don’t like puzzles.

“Discreet Music” is the name of a Brian Eno album from 1975 and also a blog series I’m running through January, prompted by a journal-writing theme I started in Germany over the holidays. It’s inspired by the David Sedaris book I’m reading that chronicles his journal entries from the late ’70s onward.

The photographs are taken from our flight from Germany over the north pole, late December.