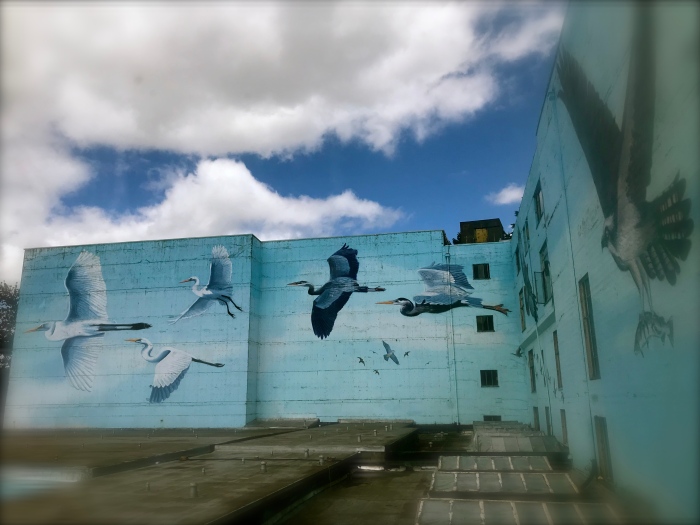 My dog is 42, but could still pass for 30. Life in seven year increments, a year at a time. Cork screwing the side of Cougar Mountain, past the Klondike marsh through the damp forest thinking about Orin Smith, former CEO of Starbucks now dead at 75: the one time I sat in his conference room on 9/11, watching the footage on his flat screens, when he decided to close all the stores so employees could be with their loved ones. How you could be a great leader and still be kind like that. A picture of him with Howard Behar and Howard Schultz from the ’90s, they all looked so young. The time they dressed up like the band KISS and lip synced a song at one of the manager conferences, and Orin played Ace Frehley, silver stars around his eyes.

We drew straws that day to see who would stay late to do the employee communications and I pulled the shortest one. Jim Morgan gave me a ride home, and we stopped at a gas station so he could buy the paper, for the headline.

The time he called after the earthquake to ask if I was okay, because he heard I was really upset. I never had a boss call before to just ask if I was alright.

Jim said there was a meeting in Orin’s office and told me and Alex to come, so we followed him in but there was nowhere to sit so we stood in the corner looking at all the senior leaders watching the flat screens, replaying the footage.

Orin nodded and smiled so we knew we were welcome. Then, that Friday they held an open forum in the ninth floor commons so we could have a moment of silence, and many of us cried. But a store in New York gave some fire fighters a hard time about bottled water, or made them pay for it, and it became a bad PR story, and Orin apologized but made it sound like the store manager was to blame, and then had to apologize to the store manager for what he’d said, and then let everyone else know he’d apologized.

I’d listen to those voicemails from my desk and then erase them, sometimes not listening to the end. And then I started writing voicemail scripts like that and sitting with executives while they recorded them, or helping with the codes so nothing went wrong. They always sounded scripted, because they were.

The VP who ran the east coast stores happened to be in Seattle on 9/11 and I helped him write a voicemail for his employees, acknowledging what happened. Leaders were expected to say something, to be comforting, because you needed that from a leader. And I remember we made reference to God in the voicemail which is maybe the only time I ever did that and probably not OK at all, but it felt necessary at the time.

Dawn and I went to the girls’ dance recital Friday and toward the end of the show one of the girls made me cry by how inspired she seemed, on stage. She was joyful, I thought. So many of the kids were good, but there was a difference with a few and it made me think of the solar eclipse, the idea of totality, what a difference it makes by just a degree or two, the difference between night and day. I wanted that vitality and joyfulness in my writing again; I kept going back up Cougar Mountain or to our local lake, or sitting under the trees out back watching the clouds, waiting. It was there for me all around. They were precious, meager moments, each one.

As I got older there was more love and appreciation for life and the years went by faster, and I decided I’d take the dog with me every time I went up Cougar Mountain, and write as much as I could. She was 42 but next year, 49.