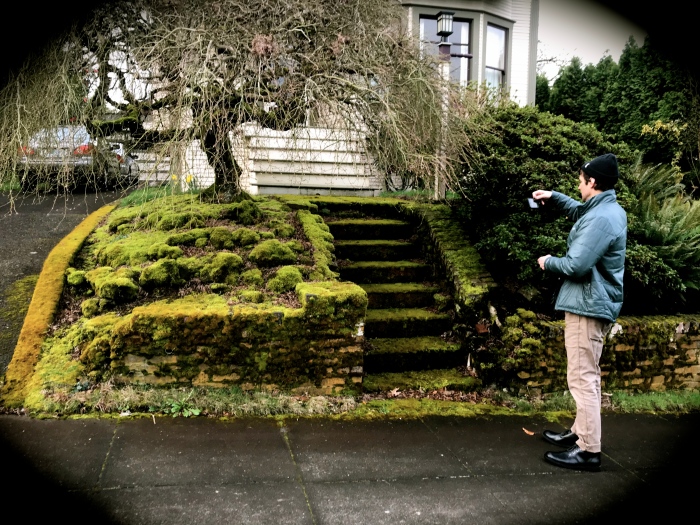 I went back to Portland, and it was the same as it always was. We got behind the quadriplegic at the neighborhood wine take out and the clerk put her bottles on the back of her buggy in a basket with a fake daisy. In the mornings we took the cloudy walk through the nearby park looking for the barred owl. She had a nest in a dead tree with a bunch of young. Loren looked up spirit guides to see what the owl meant, and it was a sign of breaking old habits, of finding new paths. But the owl was nowhere to be seen. Because Loren’s brother was up from San Francisco we went to the strip bar, this time The Devil’s Point, on Foster. They said if you sit at the stage you have to tip. I had no cash but agreed to buy drinks. Loren and Alan dropped ones at the end of each song and the dancers scooped them up and traded them in for bigger bills and then people asked for singles which the bartender traded for 20’s, and it all just recirculated like that. When I returned to our table one of the dancers was sitting in Alan’s seat, right next to me. She asked me for my name! We made small talk but I couldn’t hear her so well I explained, it was my bad ear. I had to lean in. Her name was Trixie, but even she didn’t believe it. There wasn’t so much to talk about. I had to struggle for topics, and was supportive without being weird, that was my goal. I’m new to strip bars and didn’t understand she was trying to get me to buy a lap dance (I thought she just wanted to talk). I asked what year she was born but she didn’t answer, I guess that was a Forbidden Topic. She said well, I have to freshen up now. “Freshen up,” I thought! On the street we decided we had one more stop, still. There was room for us all at the bar so I got down on the floor and did 40 push-ups. I normally do 50, but all I had in me was 40. One of the servers came around the corner and almost tripped over me, I could see his sneakers but held my ground, and didn’t flinch.

Loren and I fell asleep on the couch to ambient records and low light. I brushed my teeth and put my night guard in, caught myself in the mirror and thought man, you look pathetic. In the morning we walked down to the park and this time the owls were out, two of them. People were starting to gather with their cameras and kids and dogs, pointing. The owls liked it, they knew they were on camera. One kept eyeing me with its dark sockets, and I stared at it so long that when I closed my eyes, I still saw its face.

It was a good three-hour drive home, through the clouds and rain. I thought, if I live to be the same age as my father-in-law or step-dad, that means I’ve only got about 20 more Christmases in me. But I was going home, and glad. I stopped at a McDonalds for a Big Mac but it was hard to eat with one hand, and only made me hungrier when I was done. At home it was raining and felt like stew weather, so I made a beef carbonnade with Belgian beer and turned the heat on. Sometimes it felt like I’d lived forever. Like there was so much already, why did I need more?