Home › identity › Your so dumb Ginger

Your so dumb Ginger

Trapped inside a black pyramid in Las Vegas for four days, moving through the underground tunnels like mice between hotels, casinos, the convention center. Returning to summertime rain in Seattle and falling asleep to it, the sound of static, of burning wood. Waking with the realization that I really need to start thinking about a new job, now that this one ends on Friday. But knowing I have the month of August still to prepare.

I went back to Oil City, the coastal hike to Third Beach: the place I got inspired to write 50K words two years ago, and hoped by going back the trick would work again, but it didn’t. Passing the shallow cove where Loren and I had to bivouac once (and bivouac, a French word for “mistake”)—the two of us forced to camp beside the rock scramble we couldn’t cross because of the tide, socked in by the marine layer, bickering: then waking at 3 in the morning when the tide was low enough we could cross the rocks in the dark. Coming out by the river where I’d always stop and look back at the ocean, saying goodbye until next time.

Now home and training for a weeklong hike on the Pacific Crest Trail with Brad, more mileage than I’ve ever done, my fitness lower than I’d like it to be. Cork screwing the sides of Cougar Mountain wearing a full pack, hoping through all my soul searching that I’ll turn something up, and know which way to go. Recognizing I should be more deliberate about my job choices but not wanting to give too much power to the job either, wanting to reserve enough of myself still to entertain dreams of writing (which is easier than the writing itself, the dreams).

Sitting by my beach camp in a small spot out of the wind watching tufts of sand accumulate by the sides of my sleeping bag, thinking how time moves in strange patterns. Drinking river water the color of iced tea, from the root tannins: they say it’s safe if you filter it properly. We’ll see.

Beth came for dinner and brought a small black book she found when she was cleaning, a journal from one of the kids a few years ago, before we left for Germany. She read it aloud over the dinner table, a narrative written by Lily and illustrated by Charlotte, entitled Your So Dumb Ginger. 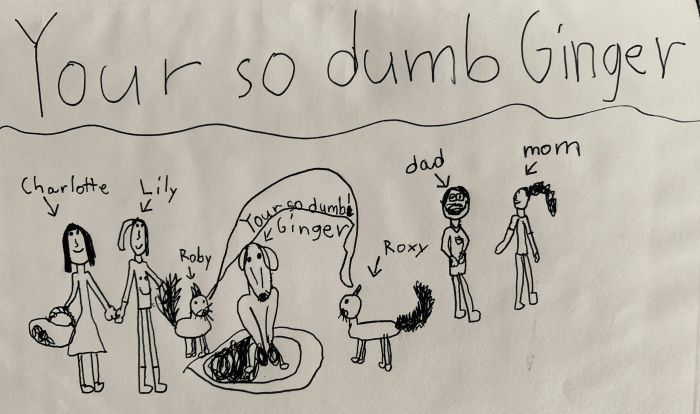 Lily described our family members one by one, and when she got to me, she said “He would have been an author if he hadn’t gotten trapped at Starbucks working as a project manager (whatever that is).”

And it shouldn’t have affected me like it did, but it did: this conflict of self and work, and how we identify. In this time between selves it felt like my previous one had died but the new one hadn’t come yet and I was blank on the inside, waiting for the new one to arrive. And why I still can’t separate who I am from what I do…the doing part can actually change the me part, for better or for worse.

Last night Lily invited a handful of friends over and all of the sudden, we had teenagers everywhere. They’re like the webworms we get on trees in these parts: unsightly but harmless. Dawn ran out for chips and pasta and lemonade, which they consumed or dropped on the patio floor for the ants. And I sat off to the side watching them, part listening, part not, mindful of the music I was playing and then more deliberate, watching them nod and bounce their legs…and as it got dark, I opened the garage bay doors and put on the red lamp, found an old tape from 1992, invited them to sit in the driveway, gave each one of them a different hat to wear, and sat on the tractor behind their circle as they talked. And Lily later said all my friends think you’re cool, which felt good. And I wondered how much it mattered to me on LinkedIn to put Author by my name one day, how much that was worth.

Like Loading...
‹ How the house felt after the kids left for summer camp
A fair way to go ›