Home › death › Kaleidoscope of life and death on the PCT

Kaleidoscope of life and death on the PCT 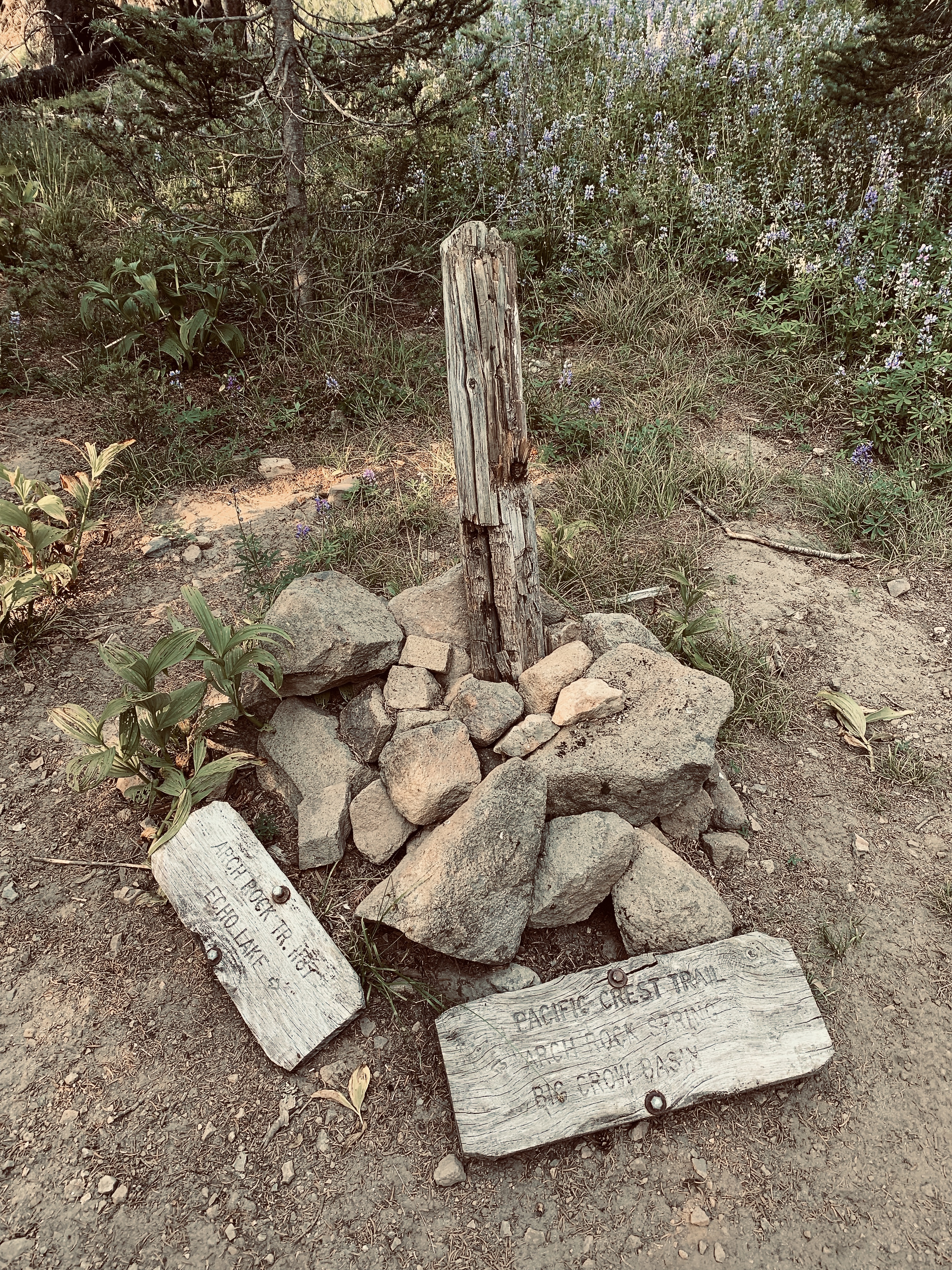 On the fourth day we rested only a couple hours from the last camp, still in the burn area. It was already getting hot by mid morning and I got there before Brad, eager to secure a camp. There was a stream right by the trail with a pipe sticking out of the ground trickling into a pool where you could crouch and bathe. There was that sound, the trickling, and then another collection of sounds: the dead trees cracking. That, and no other sound.

In three days we’d come about 45 miles already, the last two especially hot and dry. We’d toughed it out through the driest section of trail, about 11 miles with no water, had to haul it, and didn’t plan well enough…so we went several miles rationing out a liter.

The night before I’d been despondent, and Brad gave me the last of his water and reminded me about the magic beans I had. They were a kind of “sports bean,” a jelly bean with electrolytes. I drank Brad’s water and ate the bag of beans and soldiered on to reach camp at last, another 18 mile day. We did two days like that and then on the fourth day decided we could spend the day resting.

But what kind of place was this to spend the day. I realized the ground where I laid my pack was burned so bad it smudged it black like soot from a candle. It got all over your hands and sleeping bag too, anything you touched turned black, including the trees. They’d been burned alive, many leaning or hollowed out to where the only thing keeping them standing was maybe a root or two, just barely. Brad said we could probably push these trees right over.

It didn’t seem like a safe place to camp, I knew that. I studied the nearby trees within range of our tent but all of them were basically fucked. It could be like a javelin or spear, one of those branches falling through our tent. Some of the trees looked like grilled plantains split open, the peels charred, the fleshy meat underneath orange-red.

Feels kind of bleak, I said to Brad. All this death. And it did: a burned out forest years later, crumbling still. But Brad said there’s a lot of life here, too. Along the stream, alpine flowers in yellow and purple-blue. Mountain ravens, some strange insects too. One, a wasp-looking thing with blood-red legs and a black cape that came picking through the bark looking for something to eat. We were here the night in their land, a part of it and apart from it too.

I asked Brad if he thought it was okay to camp here. I deferred most responsibility to Brad, which wasn’t fair. I think given the choice, he would have kept going but I was worn out from the last few days and needed a break. There was no shade at the camp and as the sun got higher, we’d have to get creative finding some. We couldn’t really use the tent as it got well over a hundred in there. We wound up laying our bags out in the long shadow of a tall dead tree and then as the sun angled its way down we shifted our bags in the shadow like hands on a clock, slowly clicking through the day.

We got to talking about death, the chances of it. Brad said the way I look at it, it’s about risk and the actual odds of it happening. Freak cases of people getting struck by lightning: a woman getting hit by a meteor while sitting in her living room. A group of girl scouts wiped out on some field trip. There was only so much you could control. We resigned ourselves to that, to fate. And Brad told the story of being on Rainier, that route where you have to go under the ice cliff, the fact that it could give way any time and you just have to hurry through and hope it doesn’t. Maybe spread out in case it does, so the whole party doesn’t get it at the same time.

All that made me feel more alive somehow. It felt foolhardy at the same time, but a dark part of me felt clever, like I’d outsmarted death. There was no whistling sound of a tree broken off and come to flatten us in the night. No moon, no wind. Brad snoring, shifting in his bag. Breaking camp in the morning, boiling water, saddling up for the next one.

I went on ahead and came to a ridge where the burn continued, it went on for miles, all those blackened out trees twisting and standing there still. The trail curled around to a pass and disappeared. There was no one in any direction, just me and the sky and the land below it. And I knew my time was like that too, but it didn’t feel that way to me one bit. It just felt like it would go on forever.