Home › death › When the skin once so taut loses shape

When the skin once so taut loses shape 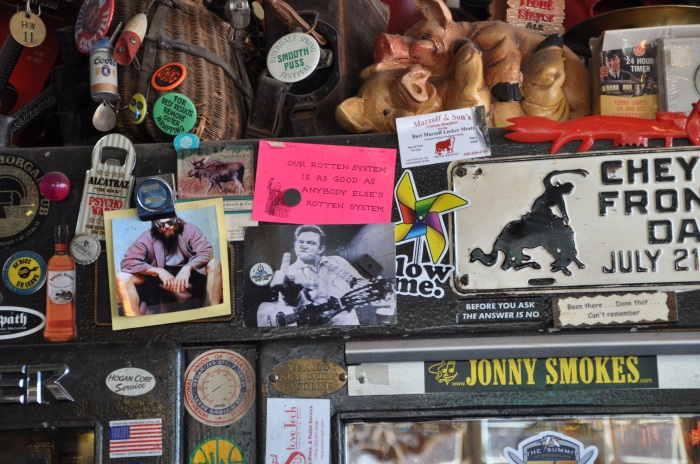 I got to the intersection and wasn’t sure which way to go. When there’s nowhere to go and you can go anywhere, it’s like spinning a Roulette wheel, deciding which way to go.

I got our good camera out which makes me nervous because it’s expensive and sensitive like a pet, it draws attention. And I never liked cameras because they say a picture is worth a thousand words and that’s a lot to compete with, for a writer.

I pulled over once I hit the country, once the roads and the valley opened up. When you’ve got a good camera it makes everything look different, like anything could be a good picture, because it can. But cameras are like pens, you can’t just wave it around and think sparks will come out, it doesn’t work that way.

I pulled into town and parked by the Masonic Temple, saw a police car and walked past it with my camera and my Carhartt vest, trying to look normal. I shot the library, shot the post office, and then got approached by a guy talking to himself, but didn’t shoot him.

There’s a bar at the end of the road where the river forks and you can turn left for more mountain towns, but I stopped short at a Last Chance Saloon type place, littered with signs and leaning pictures inside.

And it was that kind of place where everyone looks startled when you open the door. There was just one guy at the bar and the barmaid asked, First time here? And I said yes, I must have looked that way, like it was my first time.

And it was not quite noon but we’d turned the clocks forward which makes it even earlier I guess, but I went for it, and got a Pale Ale and asked could I take some pictures please.

I didn’t ask if I could write but I did; there was a bee trapped inside the window fanning the glass, and the Velvet Underground was on, the guitar climbing up and down the scales, ripping them apart, a bleeding rage of drugs and hysteria and dripping-wet chaos, and the bee keeps strumming the glass too, to where we’re all getting nervous and coming undone: there’s another guy at the bar now, three of us, and they’re all gathered around that bee saying someone should let him out so I do.

On the TV it’s some live coverage of women long distance runners and we’re all watching because it’s easier than looking at each other and a lot more gratifying: you can be a pervert and not at the same time because it’s expected, to look at it; it’s all right there on the screen, so look at it.

The women have a raw, animal beauty as they’re pressing on in the pack. The one in the front looks like she’s there and not there in the eyes, swinging her arms, breathing in and out: she could be crying/scared/ecstatic at any one moment, the emotions are moving in and out of each other like clouds behind her eyes, the mind subverted to the body, and vice versa.

And the men are beautiful too, they start in the pack and they’re calculating when they’ll go for it, when they’ll push ahead. They bob up and down like the ocean waves, and Lindsey Buckingham cries out from the background, Lightning strikes…maybe once, maybe twice.

And I write with my pen at the bar in a showy manner like I’m strapped to a lie detector and can’t control my wrist because I’m channeling, my jaw open agog, and they’re making comments now, like Are you writing us a review or something?

My backpack has a thousand page book in it and a half-growler full of water and some other devices, and when it falls off the stool it makes a weighty metallic sound like a bag of dropped groceries with cans and breakable goods and everyone looks up.

Outside I do laps around the town, off the main road, where it goes quiet on a Monday, mid-day. 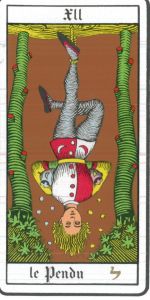 I stand eating cold pizza on a dead-end road with a woodpecker banging the insides of a metal drum at some industrial treatment center; it’s where you get salt to put on the roads if you work for the D.O.T. and it’s snowing and you’ve got a plow. There are stalls with spray-painted numbers over them and idle tractors, razor wire, ROAD CLOSED signs stacked in a corner, no one here but me and the woodpecker.

I wear my ear buds but the chord isn’t long enough so it forces me to walk with my head bent at a bad angle, the kind of off-kilter urgency that defines the sick or deranged. It catches my neck when I turn to respond to a sound, and my face curls under the weight of it, Peter Lorre style.

I take my shirt off at home and stretch out on the grass with my dog and make an inverted figure-four out of my legs like the Hanged Man. The dog’s upper lip has gone slack, hangs off to the side. She’ll never have a job but will always be happy because she knows her role, she knows her place here.