Home › musings › This bag is not a toy

This bag is not a toy 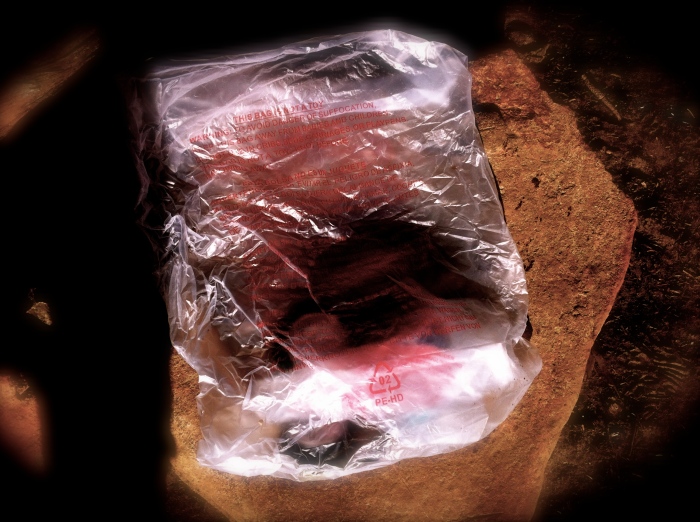 Dawn’s cell phone alarm goes off in bed but she lies there listening to the rain thinking about work and I lie there doing the same, thinking about acquiring some. The rain collects in a corner outside, it’s probably something I should fix. Sweater weather now, just in time for school: I cooked a batch of chili, set it to simmer an hour, settled into the den as the rain started and I opened the windows to smell it, got out my book but the spine split down the middle and the dried glue along the seams was the color of chicken fat. Bunches of orange berries from the Mountain Ash soon to be ravaged by the birds outside, the gray look of things waiting for what happens next, getting up to stir the stew then settle back in with the ticking of the clock. Ground beef in a tube, the first time I bought it like that, packed in like a piñata, weird squeezing it out like that. Lily has trouble with her locker combination — like me, gets confused by simple things, tripped up by left versus right, thinks about it so hard the two coalesce into one. Thinking I should get up to write and once I think that, I do.

I put together two loft beds for the kids, one from IKEA with several boxes, some with their own instruction book many pages long: no words, only pictures, stick figures smiling with implied noses above eye level insisting you should do the job with someone else. I ask Lily if she wants to help: Lily, with all the patience and optimism of her mom and me only muscle, whatever I’ve got is going.

Lily’s quick to offer reason and rational thinking when it’s needed most and right every time. The painstaking act of turning an allen wrench without enough clearance, all of Abbey Road in about 15 minutes. Lily was born to that record and we wonder if that’s part of the reason she likes it, but there’s no time for sentiment.

Gregg and I go to the gym in the morning but I walk around outside of it rather than in; it’s not so much a sun break as it is just not raining for a bit. The ground damp, the air good; I pass structures meant to keep the mailboxes dry, wooden huts with moss so thick the roofs are wearing a pelt, one with a plastic tampon shell shoved inside of it poking out, a long time ago someone painted God Bless America there, but it’s now faded. I think about inspiration, how I go outside scrounging around for it, and when I worked that’s all I could think about, was work. The Christmas we went to Germany in 2012 and finally my senses reopened, a reboot. Waking at three in the morning our first day there jet lagged, going for a walk in the dark to watch the sun come up, what little there was in mid-December, finding the slot for the Himmelsleiter as a train came down the valley, the sound of the metal brakes and rust as it slowed, the doors opening with a hiss — a whistle in the damp morning air and it was off like that to the next stop, a wake of birds and silence. Thinking then our vacation had just started, a day with no plans.

A door came down and hit me on the head in my garage and because I was on all fours, it really had momentum by the time it landed, and I shouted Jesus Christ and then hit my head again on an iron stove we bought on the Oregon coast, an antique we never do anything with, basically a $500 candle holder wedged under the stairs by the door for the crawl space, a place you would never go unless there’s a problem.

Keeping the kids up later than we should on a Wednesday to watch Monty Python and the Holy Grail because Lily got it out of the library and now it’s overdue and I wanted to get our money’s worth, to see the castle at the end we saw when we were in Scotland, on the drive down to Oban. We went right past it and Dawn made me stop and turn around to take a picture, and when we looked it up later she was right.

The cat’s missing a canine tooth now and has a limp but settles back into the pace of the season. The dog smacks her lips and waits for me to get up but seems to be in no rush. I went out to the hammock because summer came around again and it’s hard to tell how long it will stay, tried to snooze but couldn’t, remembered what it was like when I got it and couldn’t find the time to use it, how it hung there empty collecting pine needles like so many other things I’ve bought as a lifestyle I imagined for myself, and now I’m not sure what to do with.