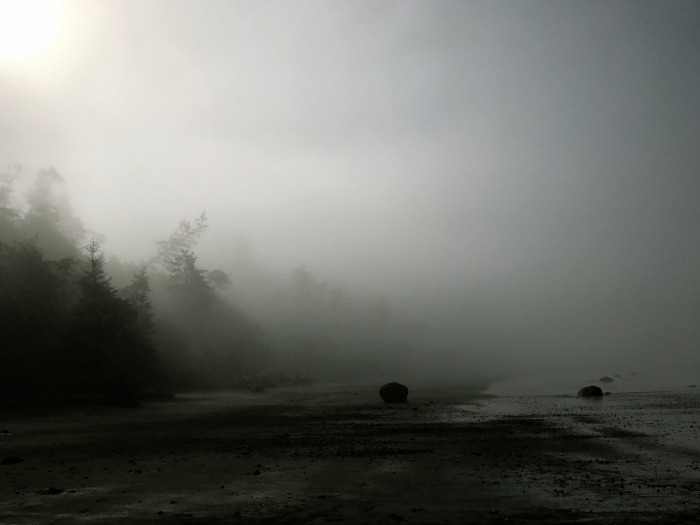 I tried to slow down, to enjoy the last of my time from Mosquito Creek to Oil City. But the tide was at its lowest, which made the rock scramble theoretically easier, with more beach to go around the big boulders below. I stopped to photograph little spider webs, the way the filtered morning sun made them sparkle. I tried, but it was hard not to project myself forward in time, to calculate when I’d be back.

The trail goes up the bluffs of some cliffs to the overland route via rope ladders, and roly-poly through muddy stretches, pockets of small streams, old-growth forest. At times it hugs the cliff’s edge where you get views further on, and I thought I could see the infamous Hoh Head, that piece of land that juts out in the ocean with the vomit of all those volcanic rocks, the same they’ve been since I’d been coming here, 20 years now.

But it was disorienting coming to those vistas, looking out. I dropped down the rope ladder and saw the first of the big rocks in the ocean, but it was all socked in at Jefferson Cove, a different world. The rocks disappearing in the mist and fog, changing form: they had the same effect looking back on peaks we’d climbed from the highway, different at different angles…like the slabs of snow Brad cut from camp our last time together and stacked like angular snowmen; melting out they became shark fins or head stones; they looked to be crying, how they dripped on the edge.

The truth was like a shell game, always changing, always different depending on the viewer. I wanted to understand if there was a higher truth, a hierarchy of truths…that built upon knowledge, perception, beliefs…that somehow made us who we are, made us “us.”

But identity was like that too, those rocks: it was there in a real, true sense but it could change depending on the viewer. We’d probably all see something different in those rocks, or not see them at all. We saw the world through the confines of ourselves, the only way we could. It was worse probably in the choices we made for our kids, our partners or loved ones, our elected officials…we thrust ourselves upon them and all our expectations, all we imagined we could be, lived through them. Who they were mattered less than who we wanted them to be.

And the past was the same; despite how much really happened, it was a shell game too, a series of rocks going in and out of the fog. You came to it, the same lookout point, but it was different each time. And over time that lookout point is gone, and you’ve forgotten how you got there. Things change, but it’s not time that changes them, it’s something else.

I got down on the beach and it was so socked in, you couldn’t see the other side of the cove. I imagined that big clump of rocks was a ship run aground, and the party of hikers emerging from it pirates, with their poles and packs.

With our presidential election the truth had clearly lost out and we were all exposed with our childlike innocence playing by another set of rules, imagined rules. Far more important than the truth is what we believe, and we could be made to believe anything. We were complicit like that. There were still those so full of anger and hate they wanted to deny the Jews their Holocaust, wanted to blame them for making it up. The truth is childlike in its innocence, it’s just itself. It doesn’t bring weapons or know how to cheat. It’s its own weapon, when used wrong. It’s like an ice ax, you can hurt someone with it or cut yourself if you’re careless.

I’d said things like that that were the truth I regret, things that didn’t need to be said. We say those things for ourselves, sometimes. Confessions can be the most selfish acts, really. I wonder if there’s things we say or do we should just keep to ourselves, like a cough, better kept in our hands.

Our neighbors and friends Chris and Wendy lived below us in Wallingford, and Wendy got into a bad accident once, almost died, went into a coma, but came out of it and recovered, though she won’t ever walk the same or be the same, really. There are accidents like that, and suffering, that likely challenge you to your core, that change you in a way you have to fight against, to not be defined by it, your accident, your new limitations.

Chris and I were up late talking about things after that; Chris was trying to make sense of it, and I was trying to relate: I said I remembered, I had a scene of the two of them once…I could see them through the window in their apartment dancing one night, I said that, but didn’t think it would hurt, to put him back in that moment, but he couldn’t take it, it hurt him so bad to picture that.

Or my friend Joe, the guy I first came to Oil City with in ’97: when it was time for him to leave Seattle, to move to Tennessee with his wife Katie, I confided in him, I confessed, I didn’t really like Katie. Katie had hit on me when she was drunk one time and I lost my respect for her after that. I couldn’t tell Joe that, so I just said I didn’t think she was right for him. And wisely he went with his wife, he ignored me. We fell out of touch. And maybe she didn’t hit on me, maybe I misremembered, or imagined that. He likely saw something different in her, regardless of who she was. She was something different to him.

They were just rocks. I got up on the rocks, felt strong, felt young again. I was confident in how I looked and moved. I was going solo, the other parties saw that. I had some mud on me and looked rugged. I went down a couple times on the rocks and realized my hand was bleeding, lacerated and sticky. It made me think of Rambo again, the times I pictured myself like that wading through the water, hiding in the swamp, just my eyes above the surface, springing up with my bow, dead on the first strike: POW!

Though the tide was out, climbing over the rocks was still hard. Many were covered with lichen or sharp bi-valve things. There were pools of salt water, inter-tidal zones they’re called, with star fish and all kinds of cool shit you could look for, but I never did: it was too stressful being out there with all those rocks, the tide coming in.

I realized the blood on my hand was from the blisters I got splitting wood the prior weekend. They started to heal over but falling on the rocks ruined all that. I crouched down in some salt water and cleaned it out. I came to the rock where Loren and I had trouble that one time, when we got trapped by the tide, had a real moment of reckoning, and the rock never looked the same, not nearly as ominous, as it did then. You could take pictures of it but the pictures lied, they told you nothing.

There was no way to record what happened that day, the scale and circumstance. In many ways the past was dream-like, like that. There was perhaps some nugget of meaning you could extract but it was a crude calculation, a dead reckoning, the stuff of fortune tellers and tea leaf readers. So much of it got forgotten, it’s like it didn’t happen.

The truth was like that, the past. Our identities. I wondered what was left of it then, the truth? It was too Walt Whitman to just stand there in the trees, calling it that. It had to be in me, too.

Like Loading...
‹ A new path to the waterfall (for Brad)
The imagined superhero complex | Field notes from the Pacific coast ›