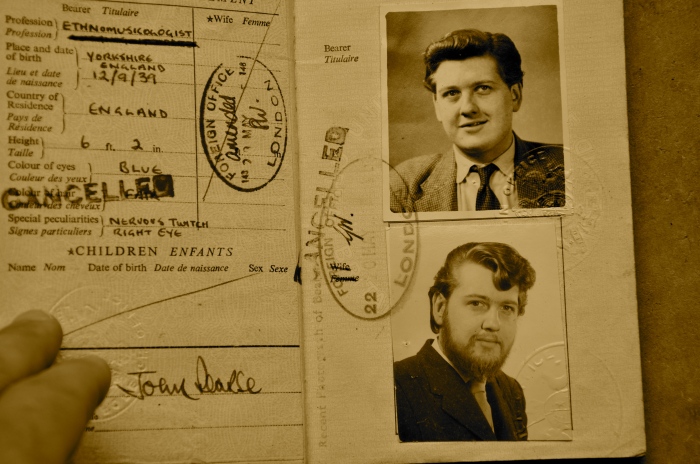 If you want your bill at a German restaurant you say, “Die Rechnung, bitte,” which means the reckoning. And that’s what I’ve been doing by cleaning out my garage and going through personal things — I’m reconciling the past, settling up.

I had two boxes left and was running out of steam. These boxes contain remnants of my life, my wife’s, my mom’s and stepdad John.

Yesterday I found John’s notebook from when he attended English public school in the 1950s, along with notes by the professor and John’s handwriting as an adolescent, drawings that were graded with critical remarks, which seems excessively cruel even for English headmasters. 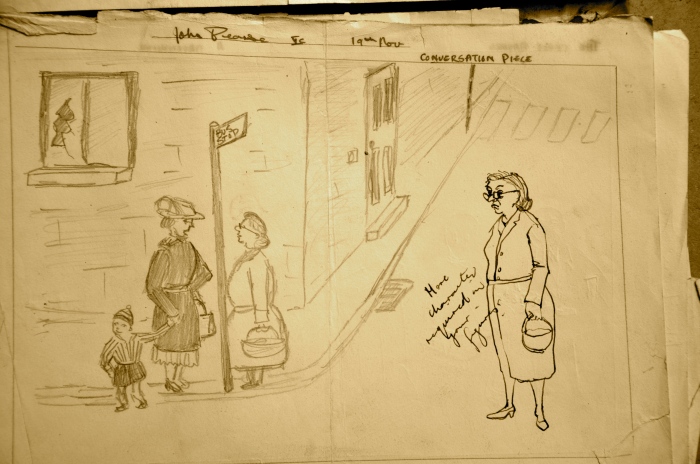 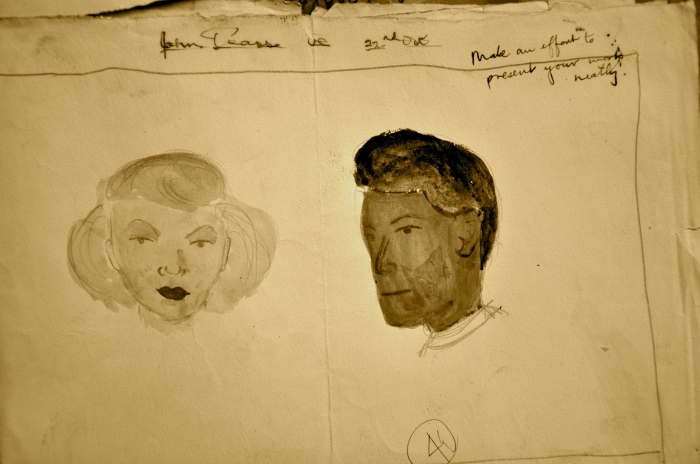 “Make an effort to present your work neatly”

(Trees) “Make an effort with your work”

It’s impossible to go through these things and not see the person there. It is really like releasing a Genie from a lamp.

John told fantastic stories, lived a fantastic life — fantastic in the true spirit of the word, born out of fantasy. Sometimes it was hard to follow or fathom the stories about all the people he’d met, the places he’d been. The fantastic became commonplace.

I dragged the plastic bin to the edge of the driveway just inside the garage, as a storm was coming on. And here was a photo of a church in Wales — sure enough, the church where he was baptized, accompanied by the programme dated April 1940, with notes inside about soldiers and donations and so forth.

And newspaper clippings in German with his handwriting at the top, with the date. All the German text with the name John Pearse that stands out in the middle. 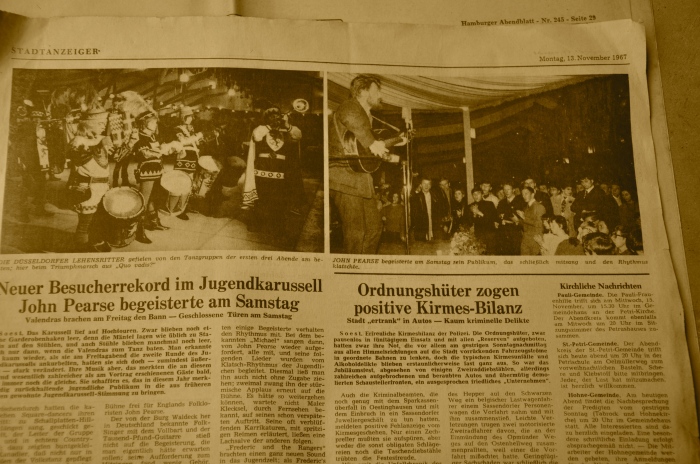 There are photos of John with his first wife playing the fiddle and John, smoking a pipe in a Gandalf-pose. We never talked about Terry, who John married when he was young: he’d left England for mainland Europe one time and while gone, she was raped by one of her guitar students and driven into a catatonic state for the balance of their marriage, which John annulled some time later.

There are photos of John in a tuxedo, surely off to be married, a copy of their wedding programme, not much else.

And a letter John saved from Frank Martin, the owner of Martin guitars, dated 1958 and typed, a response to John’s inquiry about wanting to own a Martin one day. He would go on to work for Martin as a designer some 25 years later, amassing Martins along the way. He saved the letter for sentimental reasons, nourishing his dream to own a Martin.

So it’s hard to go through these things and not see pieces of the person buried inside the boxes, dreams hatching and keepsakes representing key moments in time. I feel like a burglar breaking into my own house, going through these things, and as I look at his photos I’m compelled to retell his story some day, as a way of honoring him.

John and my mom moved to Germany because John had enjoyed the most success there as a musician. Germans responded to the tradition of American Folk music — Volksmusik — more than elsewhere, and it was perhaps the best memories for John, in small German villages playing clubs, getting to know the locals and their traditions.

Amid these clippings I find notes I wrote to him that he’d saved, snapshots from our time together and wishes for many more.

I find a binder with information on coastal juvenile salmonids from a research project I worked on to restore salmon populations, funded by Starbucks when the company was encouraging people to get involved with environmental endeavors, a kind of misguided PR thing perhaps, but its heart in the right place.

I gutted the binder to make room for my manuscript which I’ll finish, print and read on a flight to Germany next month to transport our pets and leave them there until we all return for nine months at the end of July. I tore off a piece of blue painter’s tape, put it on the binder’s spine and wrote “The Last 22 Years.”