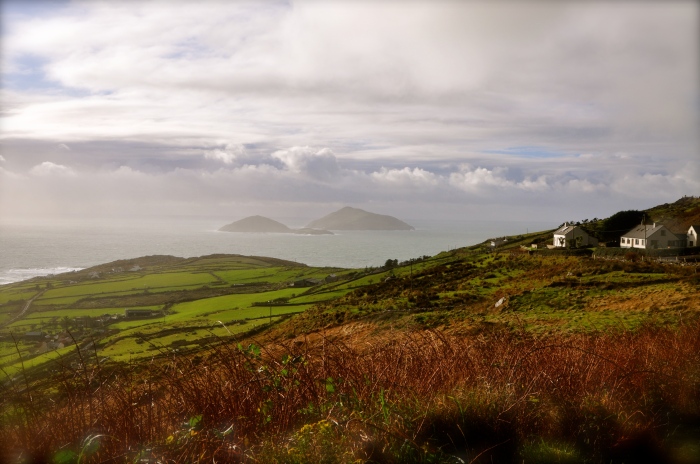 Wet snow tangled in the hair of the grass outside of London, topping the cars like confetti. Going back to a Sunday a month ago in Galway, a neighborhood ten minutes outside of town called Salthill, that day we started coming apart as a family on the beach, in the wind and rain — and I walked out on a causeway to a place called Mutton Island that was off-limits to the public, where they process waste.

A couple casinos, fish and chips takeaways, off-licence shops, a Texaco self-service station that dings when a car pulls up. Beachfront apartments with cheap outdoor furniture covered in plastic, tied down with chord. It’s the cheapest booking we’ve made and we have low expectations. The building manager is in his 50s and has a Don’t Fuck with Me look about him, looks like that’s what he does for a living and nothing else: he’s used to breaking up parties and kicking out drunks, used to cleaning toilets himself to cut back on costs. We fix up in advance, no contract, all cash. He says the weather…is not good. He says it matter-of-fact, delivering news like a doctor when there’s no need to sugar coat things, leans over the railing toward the harbor. Says there’s sharks out there that come in for the dolphins, and they had to start putting them down because there were women diving there last summer and the dolphins came around to nudge them away because it’s the dolphins’ territory where they breed or something, and when they touched the women with their noses it made them bleed and could attract the sharks, so they had to put them down. Careful with the kids, not like you’d go out there in this weather anyway. And despite this, there are still figures on the sand rummaging for shells in the mist and fog, little Irish voices. A woman who’s running looks like she’s got red leg warmers but it’s her skin gone salmon-colored from the cold. There’s something out on the water it looks like you could walk to, but we can’t tell if it’s real or an illusion.

The apartment is stripped clean, a beach party place where we get the sense everything is numbered in its drawers with a checklist to turn things over fast. Two rolls of toilet paper “to get you started,” one coffee filter, some salt, no pepper.

Mid-December, Christmas coming on, Galway. Salthill. Home schooling. Fears about Christmas, what it will be like. Charlotte, holding out hope Santa is real, probing how exactly it will work with him knowing our whereabouts. Lily, on a sidewalk in Amsterdam lets it slip about a classmate, some scrap I’m half-hearing that ends with “(that dumb ass) still believes in Santa Claus.”

We decide we just have to get out of the apartment, do anything, do nothing, but at least get out. On the beach in the wind and rain, Charlotte’s stork bite coming out, stubborn and pissed off, hating us both in different but very specific, well thought out ways.

Lily asks why I’m crying and I say it’s the wind; Dawn hides her face from the kids. But 20 minutes later we’re in the car with the heat going pulling into a parking garage in town, getting seated at a restaurant and hearing about the specials.

And we trudge through the week looking forward to Christmas and thank god mom can come up from Germany so we can have some semblance of home and tradition, and another force to break up our own — and when I drive out to get mom at the airport in Cork and we’re returning late at night, the cars ahead of us are slowing down on the road for some reason and my instinct is to get pissed off and go around them but I realize there’s a figure in the dark, it’s a horse in the middle of the road, and cars are going fast in either direction and mom wants to get out of the car to help the horse and I say no, and keep going, and as we enter the next roundabout we feel it’s a pall that’s come down over us, the feeling of that horse lost in the dark, as if it could symbolize something or serve as an omen, could stand for any number of things that could go missing or lost, could kill you if you’re not careful.

We drive the ring of Kerry, and can see in the distance off the coast large outcroppings of rocky islands, one where they filmed the last scene from Star Wars, and Dawn helps me talk through my story rewrite, and we stop in a place for lunch we speculate the cast from the film may have visited, and drive by the bay of Dingle on our way home.

The girls are unimpressed with stories of how we were about their age when the first film came out. I have the phrase in my head, that things happen gradually over time and then all at once, and the image of an hour glass, how the grains of sand pass through the stem and seem to speed up at the end.