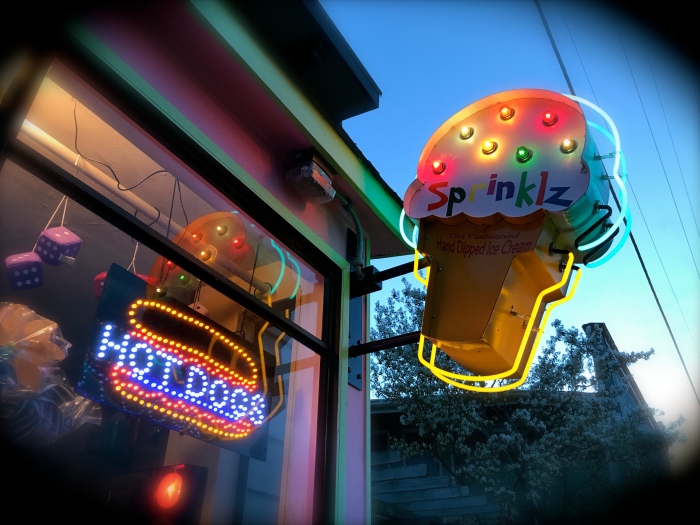 The last morning I went down to the whale-watching bench to say goodbye and there were no sounds on a Saturday but the birds, a crow clicking on a totem pole, elderly folks shuffling up the sidewalks, bearded construction guys and their coffees…this small town, the same one Dawn and I visited on our first date all those years ago but there was nothing here we could remember or attach to from the last time….and I noticed coming up from the water a few older women out with garbage bags, picking up trash. The place was immaculate, I’d done the same the day before, an empty packet of cigarettes and soda bottle, I wanted to keep it clean. And past a store front window a book store with a blue whale’s jawbone over the doorway, books inside for kids I recognized, the Magic Treehouse series, I looked for the first one I got for Lily and found it. The past is all around us, but needs tending. And when it was time to go what memories we left would be rubbed down and removed for the next guests, known only to us.

But we learned they were having an Easter celebration for kids in town starting at 11, and the mayor pulled up in a golf cart with the Easter Bunny on his side—the mayor with his white tuxedo tails and pink cummerbund, reading a proclamation to announce spring—the kids fighting a fear impulse from the unusual bunny rabbit and their desire for free chocolate—the mayor with a bouquet of carrots wrapped in butcher paper—and the townspeople (maybe 30 of them) and the four of us, feeling like we’d been invited on stage for a cast party, the actors without their costumes from the shops where they worked during the day—and there were stuffed bunnies hidden throughout the town for the kids to go and find, and people handed out flowers to strangers, and I thought wow, the world could be like this.

I bought a large coffee in a ceramic cup and it was self-serve so I pumped it myself from an air pot, hadn’t done that since the ’90s. They were just marked regular or decaf with no fanfare, and I sat at a table outside in the sun, and it tasted great. There were even telephone booths with phones that still worked and signs saying “free local calls,” sponsored by the telecom company—and I took a picture of Lily doing a selfie in one, rusted out around the frame.

There were no good CDs in the car leaving but I pulled out an old Dave Matthews one I liked from many years ago and in the store earlier, they were playing the same song. We got home earlier than expected; we just pulled up to the ferry terminal without checking the schedule and got right on. The guy in the toll booth was listening to Django Reinhardt and I remarked on that, and he invited us into the booth, said we could have some wine and listen to it, the sun was just coming out and getting warm, you could hear the fiddle with the sea gulls and the ferry sounds.

At home all the young spring greens were leafing out, a lot of yellow. The scent of flowers on the breeze. When we were in the car with the Dave Matthews I teared up at the words, thinking he maybe really wanted to sound like Jimi Hendrix, wanted to say thanks to Jimi for inspiring him, and that inspired me too. It didn’t sound anything like Hendrix, didn’t need to.