‘Reentry Burns,’ coming back to America 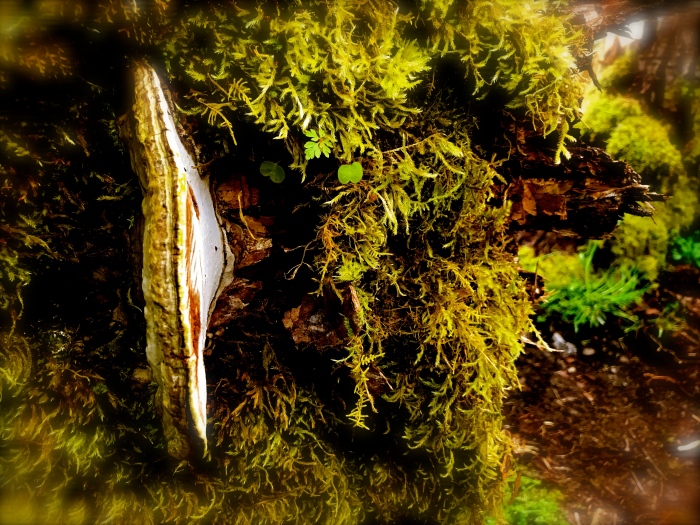 Saucer-shaped mushroom disc in the base of a fallen alder, Cougar Mountain

When I got back from Germany Dawn met me at the airport and we went for lunch at the brewhouse. The bathroom smelled the same as it always did and I think the bartender recognized me, even though we’d been away almost a year. I ordered a bowl of chili and beer, and all was right with the world. But back home where we were staying, at my mother-in-law Beth’s, there would be taxes and unopened mail, health insurance policies to purchase, the thought of going back to work. In Berlin, I’d rationalized waiting until the fall to start again. It seemed with the logistics of moving back to our house and having to cook dinner every night there just wasn’t enough time for work. I could take the summer to watch the kids and get things sorted out. Dawn lightly suggested I try a small consulting gig but the thought terrified me. My esteem was low, I didn’t understand the job descriptions and dreaded fishing around on LinkedIn. It was another world of thumbnails and catch phrases and I wanted to stay in my own world, which was somewhere between a small German village in the south and the suburbs east of Seattle.

Dawn went back to the Microsoft campus and saw people she’d been working with remotely for almost a year. It was the same for me when I took my sabbatical at Starbucks: you see people in the hallways you haven’t seen for months and many don’t even know you were gone. Which makes you wonder how much they realize you’re there, when you are.

I had the prospect of a job my friend Gregg connected me to and went downtown to meet with them. I sat in the lobby area waiting to be let in and listened to the receptionist chit chat with another guy and it reminded me of my last job. I wanted to be somewhere again, to work. I felt I was starting to get strange and couldn’t tell if that was a good thing or a place from which I’d never return.

After meeting with the guy I drew up a proposal and sent it. That was early July. They said the deal could take some time to finalize, they weren’t sure. And that was fine, I wasn’t ready to go back anyway. I followed up late July and pretty soon it was mid August and I was hiking on the PCT with Brad for five days and came back and thought it’s almost September, I should really start looking again.

I heard back from the CEO and she could meet with me at the end of September but that seemed too long. We ran into Dawn’s friend Deanna at the middle school, some orientation thing, and she said she needed someone right away. I got my hair cut and bought a computer and took down the hammock in the back yard, had a last beer.

I worked for Deanna for a few weeks but then I got a new client they’d just hired and she interviewed me and it seemed like it would work out, and it did. And I was sitting with a peer of my client who said she needed someone for a gig and was I interested, and I agreed without really understanding what it was and then I overheard her talking to my other client in the hallway, saying “yeah I took his other 20 hours” and felt like cattle, like a horse being traded—but it’s better to be cut up and consumed than left behind in the barn, unused.

Even though I was working 40 hours I could still get out some mornings to hike up Cougar Mountain with the dog. I was at the trailhead by 6, the Nawang Gombu cliffs trail. Under the leaning limbs we climbed the green slopes with bands of pink in the sky and snails on their sides and twigs and rocks, and no spreadsheets or graphs or abstractions, only the abstract of the soul, where it meets nature, and the two are reintroduced.

And I remembered teaching a backcountry navigation course when I was in the Mountaineers club, which is ridiculous because I can’t even read a compass but somehow passed the test, and there I was in the North Cascades on some ridge with about a hundred students and our whistles and emergency supplies and extra batteries: they were supposed to take a few bearings in the forest and emerge in the right spot on the other side, where the teachers waited: it’s then I learned this idea of coarse navigation, the notion you can make a series of small errors navigating but they all kind of offset one another, and somehow you still wind up where you should.

And that’s how it felt coming back, landing on my feet again, after some weird existential thing that drove me to leave my last job and wander inside myself and around Europe for almost a year, thinking if I just had enough time and space I’d figure things out.

It was a Saturday and I got the idea we should all go out to dinner, we hadn’t seen each other (the kids) much over the week, and Lily had what we’re considering to be her first boyfriend now, even though they haven’t actually gone out yet they committed to, there’d been an exchange where he asked via text if she liked him (or a friend of his had, he’d sent the text from the other boy’s phone) and Lily had written back yes, she did: and now there was a lot of back and forth from both sides (Lily’s friends and his friends) that felt to me like the movie Grease, and Lily was in the back seat admiring herself on the phone posing I think, sharing pictures of herself via an app or text, I don’t know, didn’t want to.

And I’d forgotten we wanted to celebrate the fact we’d all come back from Germany exactly a year ago now, that was the reason for the dinner but we didn’t say anything about it, we didn’t remember. Charlotte ate a raw chili pepper and thought she had to puke, and it was one of those Thai places where you take your shoes off and sit on an elevated platform in the window: so she and Dawn ran to the bathroom in their socks, and I sat there for a while with Lily drinking my Old Fashioned, wondering if the food was going to come out and get cold while they were in there, trying to puke.

When we got back we wanted to watch a movie but the kids went off to bed and Dawn and I stayed up late in the den playing records, and the rain returned, and sometimes it sounds nice hitting the leaves but last night it didn’t, and in the morning I walked in it, came home, and wrote.

Like Loading...
‹ Anthony’s Navel: Mark Paxson, growing up with Miami Vice
First there is a mountain then there is no mountain, then there is ›