Field notes from the Pacific Coast | up Ulrich’s Couloir, Stuart 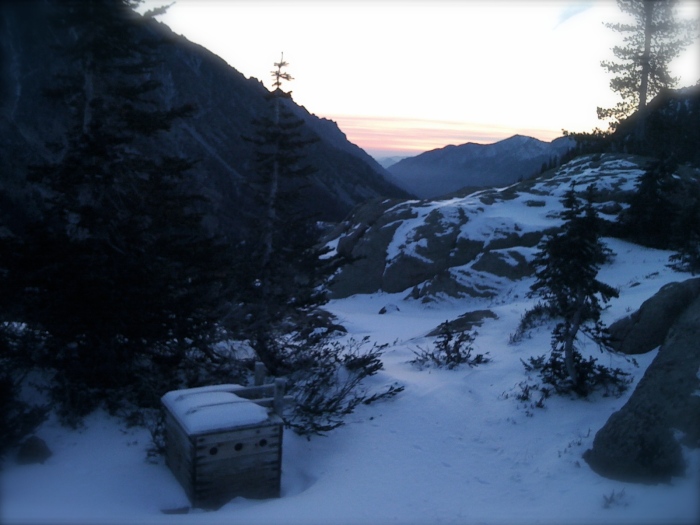 I was probably the only student in class who fell that day, and the instructors pretended not to notice, either to save me the embarrassment or because they were embarrassed themselves. How do you fall on a belay? I couldn’t remember, it didn’t seem possible. You’d have to let go of the rope but I must have been anchored in. Whatever, I hit the ground on my tailbone and it was my second fall in a month. And now I took that memory with me up Mount Stuart, the most serious peak I’d climb, more so than Rainier, St. Helens, Adams. Just me and Brad in the middle of nowhere, the days before smart phones.

I realized I hadn’t belayed in forever, coming down the rope ladder near Toleak Point, going back to camp at Mosquito Creek. There’s not much to it: you just face in to the surface you’re going down, use your feet to kick off, and keep your hands on the rope, use gloves so you don’t get rope burn.

That day I was out with a hundred students probably, the Mountaineers club in Seattle, and with my second fall I was starting to wonder if climbing was a good idea. Falling off the belay just bruised my butt and ego but falling prior to that on Mount Baring, I had to self-arrest with my ice axe, and bounced off a rock and a woman in my party. And without hitting those two I wasn’t sure I’d have stopped. But I wondered how many of those students in my class were actually doing what I was doing on the weekends. Brad and I were going up Ulrich’s Couloir, an early season route up Stuart: a long hike in, two overnights.

When Brad described a mountain or route his voice would get gravelly and loud, people would look up—and he spoke with such force and precision it made me excited and scared. It probably made me feel young and bold too, but I didn’t need that as badly then as I did now, 15 years later.

Brad recited phrases from the famous Northwest climber Fred Beckey, his series of Cascade climbing guides: detailed route descriptions with black and white photos of peaks, maps with an almost Tolkien quality, that imagined landscape of fantasy and terror…I bought one of those books but never really used it. I was glad to just follow someone who knew what they were doing, and call it good at that.

Brad described Mount Stuart, the highest non-volcanic mass of granite on the Stuart Range: the time he and the Ellis brothers got caught near the summit in a lightning storm and had to bivouac…and it seemed Brad learned to climb in real 1970s fashion, with denim blue jeans and Herman Survivors and sometimes psychedelics…and when I went out with him and Eric it felt like they were trying to relive those times, and I could relate to that now.

And because Brad’s older than me there’s a kind of paternal thing I see in him: he loves being a dad so much it extends beyond his three kids to others, and there’s probably enough kid in me, he can act as a guide in more ways than one.

Mount Stuart is just east of the Cascade range that cuts down Washington state from Canada and south, through Oregon. It has that dramatic look of the Pacific Northwest, a craggy tooth or shark’s fin—there was a time I was really drawn to mountains like that, a real attraction like an undertow, the tug of a tide.

But going up that morning it was all gray and snow and ice, and got so steep in the gully of the couloir I couldn’t imagine coming down without falling. There are rock features to look for, where to angle left, west, but your perspective can change in situations like that and it’s easy to get disoriented and flustered with the altitude, the changing weather, the strange ways our minds change and start making bad decisions.

We were in cramp-ons but not on rope: being roped up is good crossing glaciers generally but with a party of two, it’s almost a liability being tethered to someone inexperienced (like me) and getting the rope out, and dealing with it is a pain in the ass, and often we found excuses to reason ourselves out of it, even if it made sense.

So you have to trust in your axe and getting good purchase with the boots/cramp-ons, and if you fall you need to do your damnedest to kick in and hold on, anything to stop the slide, and hope that little pick digs in…though in most cases, statistics say, it’s less than 25% of the time, do people arrest.

I thought about all that going up one step at a time, keeping three points of contact, so that when I swung my leg uphill I made sure the axe was planted firmly in front with my hand good and tight around the leash, my grip on the adze…and with the gray, thinning air, the fog and clouds getting thicker, a false summit we thought was the top but it was still a good, 45 more minutes to the true summit and we were losing light, late in the day…I think for the first time since I was a kid I started to cry, I was so scared. I wanted so badly to turn back. And Brad was disappointed in himself but didn’t let it show, and as we down-climbed the College Couloir that’s much gentler and even glissaded some, my mood improved: the clouds started to burn off, and back at camp there’d be a fire and a warm meal, a little booze, and I’d walk out of there alive the next day.

I was down on myself about the whole experience. But Brad said I bet when you look back on this, you’ll be proud of what you did, it will get better over time. And driving out the next day I looked back at the mountain and imagined us there, the scale and perspective made us the size of two bugs on the back of some wild beast (and unnoticed, irrelevant)…and when I went back up the Teanaway river valley the following weekend to graduate with the Mountaineers club I mentioned it to one of the instructors, what I’d done with Brad—and I don’t know what he said but it was in front of all the other students, he suggested I’d been foolhardy and reckless, and I took a dark pride in that.

That week after Stuart I wrote an essay about our time and emailed it to some friends and people at work. My friend Drew said it read like something he’d see in a magazine, he encouraged me to do more—but I didn’t want or need to then, I was afraid—I didn’t like the idea of putting myself in the hands of someone else, to decide what’s good enough to print. For as much ego as I had, it seemed paper thin at times. There was fear that made you feel alive and kept you alive, and then there was fear that didn’t, the opposite of alive.

Brad gave me a copy of the book The Snow Leopard for my birthday, an edition he bought at Powell’s in Portland. He was good at giving gifts, took time to wrap them and handwrite little notes; I think he really thought about the gifts he gave. And when I finished The Snow Leopard, the book settled in to me and inspired me to have another go at my memoir, to leave the work parts out this time; there was so much more. I think Brad meant it that way, he knew.